This year's show had a musical theme. 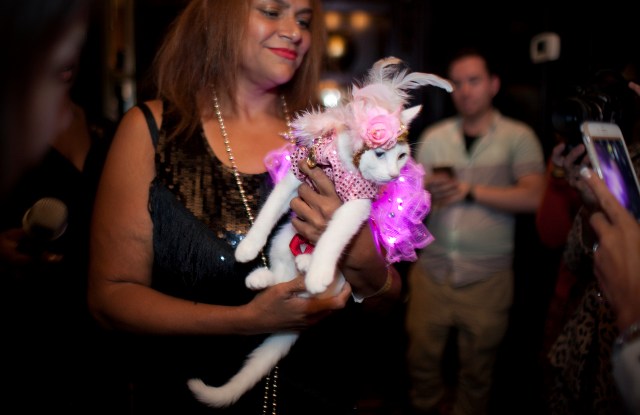 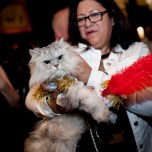 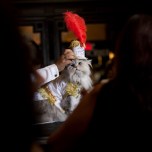 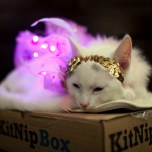 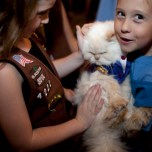 At the Algonquin Hotel’s fashion show on Thursday afternoon, the scene in the lobby was downright chaotic. A horde of girl scouts were buzzing about, guests sporting cat ears and feline prints were trying to talk their way backstage, and others were descending upon the catered spread in a feeding frenzy.

Meanwhile, backstage, the models were calm as can be — some were even taking the opportunity to catch a nap preshow.

“This little guy is Rory. It’s his first time,” said Siobhan Moore, gesturing toward her red classic tabby Persian. “His sister was supposed to be here, but she had kittens. So she kind of got out of it.” Luckily, Rory had another sibling to show him the ropes; his brother Aidan is an eight-year veteran. Together, the pair were dressed as “The King & I.”

The hotel’s annual cat fashion show is a fund-raiser for the Mayor’s Alliance for NYC’s Animals. This year’s theme was Tony award-winning musicals, and the evening featured Broadway performances — including one from “Cats” naturally — as well as cats dressed to represent a range of musicals. Sumi was sporting a feathered Tricorne, resting in a ship-shaped box to evoke the spirit of “Les Miserables”; another cat was sporting a long curly red wig, à la “Annie”; Folds the Scottish Fold was sitting with his mini guitar and brimmed hat underneath a poster for “The Sound of Music.”

“This is our third year,” said his owner Kate Arian. “He seems to be relatively comfortable in the outfits. I think he likes feeling fashionable,” she added. “He’s more fashionable than I am.” For the record, Folds also has 55,000 Instagram followers.

Certified pet fashion designer Ada Nieves had designed all the costumes for the four-legged models. A cardboard box at her feet contained her particularly fluffy cat Martini, who was gearing up for his role as “The Musical Cat [Man].” “He is a personality, that is for sure,” said Nieves, glancing down at her furry companion.

“I’ve been [designing for pets] for over 15 years,” she continued. “I dress all sorts of pets, from dogs, camels, chickens, hamster, pigs. But this event is particularly for cats, because they pay honor to Matilda.”

Ah, Matilda. The Algonquin Hotel’s resident cat has retired after an illustrious seven years. Taking her place is Hamlet, an orange tabby who made his grand debut on Thursday night as the hotel’s 12th resident cat mascot.