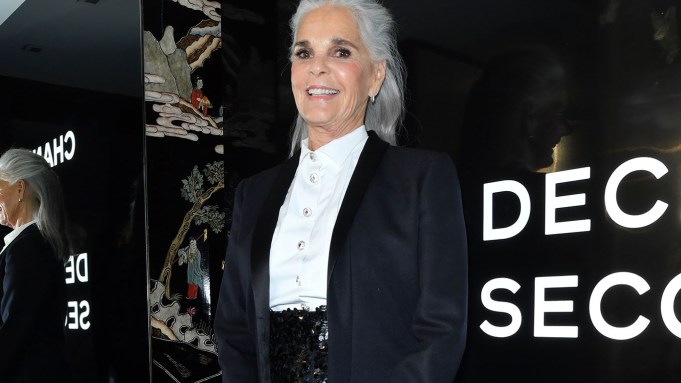 PARIS — The brand ambassadors attending the launch of Chanel’s revamped J12 watch on Thursday night have all been working with the French fashion house for years, but only one could boast of having met Gabrielle “Coco” Chanel herself.

“Most of these girls have been working a long time with Chanel, but I’m the oldest living one,” said Ali MacGraw, sitting on a sofa in the Chanel jewelry boutique on Place Vendôme next to the youngest of the bunch, Lily-Rose Depp.

The “Love Story” star was working as a stylist to fashion photographer Melvin Sokolsky in the Sixties when he was asked to shoot a Chanel collection — and Mademoiselle made quite the impression.

“She sat in the great suit — the old black one, you know, with a combination of real and great faux jewels, and a black grosgrain ribbon with beautiful scissors on it — and the models came in one at a time with what looked like absolutely perfect clothing,” the 80-year-old actress recalled.

“And she would sit there and say, ‘You call that a shirt?’” MacGraw said, mimicking the sound of scissors slashing through fabric. “And she would take the scissors and say, ‘This is your idea of a waistline?’ I mean, the women left as if they’d been gang-raped.”

Still, MacGraw was fascinated by Chanel’s aura. “I’ve read lots about her, I love what she did, but there was a real honesty about the way the essence of her was carried,” she said. Similarly, she was full of admiration for the house’s relationship with Karl Lagerfeld, who died in February after 36 years as creative director.

“I’m so kind of sad for the couturiers now that do a year with somebody and then they’re chucked out and they go someplace else,” she lamented. “I think that’s ridiculous and it’s very much of our time. It’s the shallowness of our time, and the fact that the great ‘get’ now is somebody with a gigantic presence on the Internet.”

MacGraw strayed into acting after appearing in a campaign for Chanel No. 5 perfume, for which she was paid the princely sum of $200 — at the time, the equivalent of a month’s salary. An agent spotted the image in a drugstore and helped launch her film career with “Goodbye, Columbus.”

But she’s still not comfortable in front of a camera. “I can’t stand it, even now,” she said, noting she has no online presence either. “I don’t do social media at all, not one bit. I don’t read it, and I don’t put myself on it, and it’s somebody else’s idea of a good time.”

Knightley, who has been a Chanel brand ambassador since 2006, revealed her growing baby bump in an ivory Empire-line dress accessorized with a white ceramic J12. “I don’t normally wear a watch, but I’ve just been given this and I think I may wear it,” she said with a conspiratorial whisper.

The British actress explained that she and her husband, James Righton, have banned phones from their bedroom. “We’ve actually got small clocks next to the bed now. We’ve gone old school. That’s why I think the watch is good, because really I’m keeping my phone around too much, because you’re checking the time, but actually then you check other things, and I’d rather not,” she mused.

Though Knightley, whose second child is due in the fall, has modeled for countless Chanel beauty and jewelry campaigns, she sees the pressure on women with a critical eye. She will appear alongside Gugu Mbatha-Raw and Suki Waterhouse in the upcoming “Misbehaviour,” inspired by the true events of the 1970 Miss World pageant, which was disrupted by members of the women’s liberation movement.

“The pressure on beauty is absolutely huge for every woman, and I think still the job that women are paid most to do and are paid more than men is modeling. So I think the world very much tells us that it’s important to be beautiful, and obviously isn’t saying, ‘Hey, we need to know what you think,’” Knightley said.

The actress and singer, who shot her first Chanel campaign with Jean-Paul Goude when she was 18, has been keenly feeling the passage of time since Lagerfeld’s passing.

“I think back to all the personal moments I spent with Karl, whether it was on photo shoots, trips, or whether we were talking and laughing. I loved listening to him talk about art, music, literature — and gossip, too. He was so funny,” she said. “I’ve been working with these people for decades. It’s beautiful and it’s reassuring.”

Schiffer has also gotten used to measuring time in Chanel years, having featured in her first campaign for the brand in 1998. “I did so many, not only campaigns with Karl Lagerfeld for Chanel, but also so many other photo shoots that we did for fashion magazines,” she said.

She confessed that, true to Germany’s reputation, she is unfailingly punctual. “I do live up to the stereotype. I have met Germans who are not very punctual, so maybe it doesn’t go for everyone, but I’m definitely very punctual because I don’t like waiting for other people. I wouldn’t want anyone to be waiting for me,” she said.

Campbell, on the other hand, was reliably late. By the time most guests had migrated across the square for dinner at the Ritz hotel, a couple of photographers were still waiting to shoot her at the photo call.