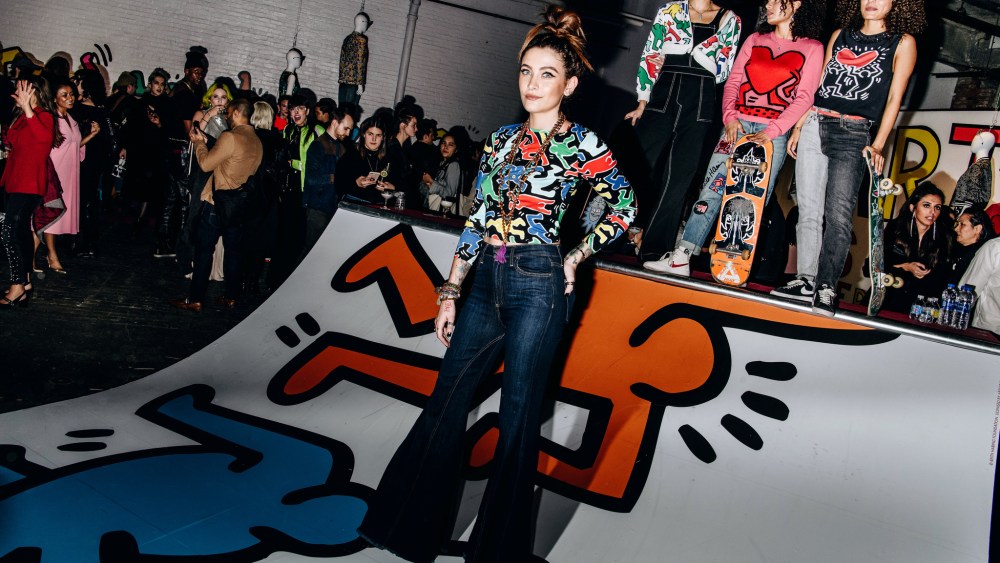 When one thinks about the brand Alice + Olivia, associations with streetwear, skaters and tomboys might not immediately come to mind. But this was the audience the label reached out to on Tuesday night, with its party in celebration of the new Keith Haring x Alice + Olivia collection.

The inside of Highline Stages in Chelsea had been transformed that evening into something of a playground for Nineties kids: There was a ramp in the middle of the room where Danielle Melendez, Jules Lorenzo and Brenn Lorenzo of “Skate Kitchen” rode their skateboards — while wearing T-shirts from the collaboration. Throwback arcade games like Frogger and Ms. Pac-Man lined the perimeter of the space. Models wearing looks from the line stood and danced periodically to the thumping old-school tracks Mia Moretti and Margot of The Dolls played. Nicky Hilton Rothschild cradled one of the signature cocktails by Absolut Elyx for the night, replete with a colorful dusting of Haring’s signature depiction of a cartoon person. Lion Babe, Huma Abedin and Deray McKesson also circled the floor. Chief executive officer of Alice + Olivia, Stacey Bendet, showed former Macy’s chairman and ceo Terry J. Lundgren — he’d matched black sneakers with his gray suit — some of the wares.

Lundgren, who said he was something of a mentor to Bendet, mentioned the ceo is “not shy” about telling him when the presentation of her clothing in a department store isn’t up to snuff. Lundgren said he’d seen the Bloomingdale’s employees setting up the Keith Haring x Alice + Olivia line in the store, and told Bendet she would like it.

Bendet, meanwhile, expounded upon how her tie-up with Keith Haring was different from the myriad collaborations his foundation has fostered since the artist’s death.

“[Haring] wanted artwork to be democratized, that was his whole mission,” Bendet said, standing near a wall that was papered with outlines of cartoon people holding the “Radiant Love” heart motif, waiting for guests to fill in the white space like a coloring book. “His foundation wants other creative people to take his art and do things with it. I’ve studied a lot of what’s been done, and a lot of his work’s been done for product, or, like, skaters. But we made it really feminine.”

The VIP guest of the night was indisputably Paris Jackson, who came through with her friend Caroline D’Amore wearing a leather perfecto jacket slung over her shoulders and bell-bottom jeans. The minute she walked in, people started crowding around her and followed her around the party as she took pictures in front of the various Haring backdrops. The DJ, perhaps by coincidence, suddenly threw on “Beat It” and D’Amore gave Jackson a smile. Jackson returned with a tight, knowing grin and D’Amore hugged her.

When asked whether it was weird for Jackson to hear her father’s music when she comes to a party, D’Amore simply responded, “She loves it.”

Callum Turner Is Pretending He’s Not About to Be Famous