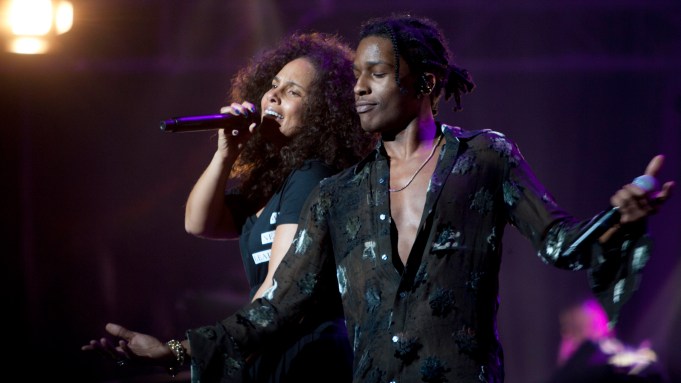 “Orange is not the new black.”

The final presidential debate was in full swing Wednesday night, but on a stage far from Las Vegas, Alicia Keys was staking her political ground at the Hammerstein Ballroom. “Right now, an orange man is insulting our first female candidate for president,” Keys continued, playing a light soundtrack for herself on piano. “And trying to gamble with our democracy, gambling with the freedoms we fought so hard for.”

The singer was hosting the annual Black Ball Gala to benefit Keep a Child Alive, the organization she cofounded in 2003 to raise funds towards AIDS/HIV research and provide support for families in Africa living with the disease. This year’s event took on an Eighties theme, and appropriately honored music producer Clive Davis for his multidecade-long activism. A few of the musical artists he signed had come out to perform — Eighties hip-hop duo Salt-N-Pepa and Patti Smith — as well as Chance the Rapper, A$AP Rocky and Keys, natch.

“My favorite thing about the Eighties was the really kind of reckless abandon of style and energy,” Keys said offstage, dressed in a black Public School ensemble for the night. “There was this real kind of idea that you had to be an individual. You always had to have your own thing, and I thought that was really fly, it pushed people to be individuals.”

Her husband, Swizz Beatz, had embraced the Eighties dress code by tacking a Basquiat crown pin onto his suit. “The thing about the Eighties is it was a major part of shaping culture, and with that came a lot of tragedies and success at the same time,” said Mr. Beatz. “If you look back, the Eighties are like right now, from the way people are dressing, to the way that artists are expressing themselves, to the way that we’re not just settling for anything anymore.”

“My favorite part of the Eighties was that I was younger then,” Baz Luhrmann reminisced. “I had a crazy great time, and I wore ridiculous hair and had a lot of piercings, and the world seemed impossibly endless and joyous and fun.”

Smith experienced a different kind of fun. “Truthfully, in the Eighties I withdrew from public life,” she said. “I moved to Detroit and raised my children.” Later, Smith and Keys would close out the night with a performance of “People Have the Power.”

“What I’m interested in is issues. The debates have been so nasty. And Donald Trump is so unqualified to talk about certain things,” Smith said, noting that she planned to watch the debate the next day. “I know what I’m going to do. No matter how unhappy I am with things, I’ll vote, as I do every election year.”