Lily Kwong, Selita Ebanks, Lauren Santo Domingo and scads of others wore gowns from the designer, who sponsored the black-tie event. 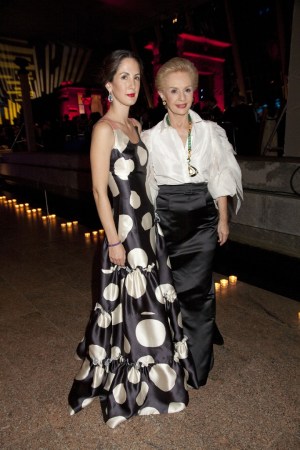 Had Carolina Herrera been trying to leave behind her design studio while mingling at Thursday night’s Metropolitan Museum of Art’s Apollo Circle Benefit, she only needed to glance around the room to be reminded of her work.

Before The Misshapes got the crowd going in The Temple of Dendur, Herrera raised a glass of Champagne with an inner circle of guests in the Charles Engelhard Court. “I love it, I love, I love it,” the designer said of her involvement. “It is wonderful to see all these young people and they are here to support the museum.”

The event’s chairs Genevieve Kinney, Laura Zuckerman and Alejandro Santo Domingo had no shortage of people to greet, including Seth Myers, NFLer Justin Tuck and Bronson van Wyck, among others. The Met’s president, Emily Rafferty, was also making the rounds at the Pop!-themed event inspired by the works of Jasper Johns, Andy Warhol, Roy Lichenstein and other primary color-loving artists.

Before calling it a night, Herrera mentioned how she has been busy flying the friendly skies. By the time Thanksgiving arrives, she will have been to Peru, the Middle East, Brazil and France for business. Asked if she ever gets away from New York without working, Herrera said, “Yes, I love my days off.”