All for Chrome Hearts and Kate Hudson

The accessories brand threw a party at its West Hollywood boutique to celebrate its latest collaboration with Kate Hudson. 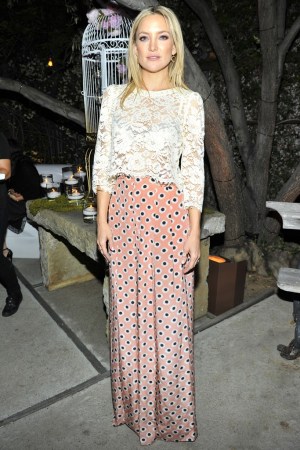 Sporting the grommeted boots he designed with Chrome Hearts, Gareth Pugh looked forward to adding jewelry and men’s wear to his next project with the brand, which is also run by Laurie’s husband, Richard, and oldest daughter, Jesse Jo. “We’re open to doing something big in January in London,” Pugh said.

Samantha Ronson whispered “congratulations” to Fergie as she squeezed by the sushi-noshing, martini-swilling guests, including Rachel Zoe, Arianne Phillips, J.D. King, Brooke Burke, David Charvet and the Sex Pistols’ Steve Jones. The well wishes could have been for Fergie’s growing empire that encompasses fragrance, shoes and cosmetics; for her Chrome Hearts trove that includes chunky rings, a pizza cutter, rat trap and cheese grater; for her eight-month-old son, Axl, or for Axl’s own Chrome Hearts collection.

“I worship everything Chrome Hearts,” Fergie said, adding that she started her obsession in the late Nineties. She’s ready to scoop up Hudson’s new designs, which range from an aquamarine baguette ring and pink-lensed sunglasses to square-shaped bangles in white and yellow gold. “I love that they’ve gone softer with Kate’s collection,” she said. “One part of Chrome Hearts is the rock star. The other’s the rock star’s girlfriend.”

Hudson was flattered by her “Nine” costar’s praise. The designs arose organically from her relationship with longtime friend Stark. “Artistically and creatively, we have very different styles. We complement each other,” Hudson said. Noted Stark: “She adds a feminine side.”