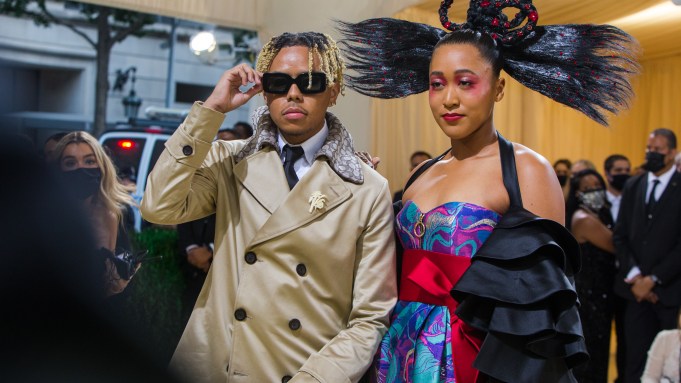 It is the first Met Gala since May 2019, and what a different world it is. Would the annual event, fashion’s biggest night and a feast for style and celebrity fans alike, feel the same?

In short, yes. While reporters are masked and the approved number of outlets shrunk, it still is shoulder to shoulder and celebs still do the same dance between flashing cameras, screaming fans across the street and a whole lot of pomp.

Ilana Glazer, co-host of the Met livestream, is the first celeb to arrive, and brings confirmation that — scarily — celeb guests won’t be required to wear masks on the red carpet.

Around 5:30, a drumline descends Fifth Avenue and up the stairs, playing “Empire State of Mind” and “Uptown Funk” as the crowd screams. And yes, even reporters are delighted. It sets the tone for a fun, uplifting evening. Moments later, though, police cars pull up and lights flash. Biden, that you? Word flows in that it is a defund the police protest, stopping traffic on Fifth.

New York Rep. Carolyn Maloney is the first celeb to make it through, wearing a draping that declares “equal rights for women” and banging a tambourine that reads, “ERA YES.” It is the first political statement of the night.

At 6 p.m., darling Timothée Chalamet (one of the night’s co-hosts) arrives. Adorable as always. He waves and strolls in Converse high-tops. “What’s more American than Chuck Taylors?” he says. The rest of his look is Haider Ackermann.

We have sweat pants at the Met Gala! Courtesy of Jerry Lorenzo of Fear of God.

James Corden says the best part of the Met Gala is “watching people stare at bread.”

Amanda Gorman is dressed in Vera Wang, inspired by the Statue of Liberty. She is graceful and says her clutch is inspired by poetry.

Ella Emhoff and Julia Garner arrive holding hands before breaking off to work the cameras. In Stella McCartney — already a pro, Emhoff tosses the name over her shoulder.

Evan Mock is in archival Thom Browne, and says his American fashion icon is “himself” and that he cried while watching the Thom Browne show on Saturday while doing research. He’s in touch with his emotions, and has a healthy ego at that!

Georgina Chapman and Adrien Brody arrive next. “I’m just an escort,” he says, before sharing that he’s wearing Dior.

Maisie Williams is wearing a creation by her boyfriend, Reuben Selby. “R e u b e n” she spells for reporters.

Are those screams for… Mayor De Blasio? Oh no wait, that’s Billie Eilish behind him.

Channing Tatum is here sans Zoë Kravitz, looking a bit bodyguard and out of place in his plain black tux and shaved head. Kravitz will arrive later with the Saint Laurent team.

Lil Nas X peels back his cape to reveal a gold statue suit of armor. He has to hop up the stairs due to the armor, but of course makes it entertaining.

Chance the Rapper, wearing a custom collaboration with Ralph Lauren, says his look is a tribute to “hip-hop, tribute to Blackness because Blackness is American culture.”

“I’m excited to see everybody — I haven’t seen anybody in two and a half years,” says Iman, whose Harris Reed look gives off “hope.”

Elliot Page is quietly climbing the stairs and heading inside.

Tom Daley, who comes with the Moschino crew, says he is thinking of starting his own knitwear line, after his knitting went viral at the Olympics.

The crowd goes crazy for Pete Davidson in Thom Browne, sleeping on Josh O’Connor, who slinks behind him (a mistake!).

Irina Shayk is debuting a short hair cut. “He made me do it!” she says, pointing to Jeremy Scott. “Guilty!” he replies.

AOC is in a gown that says “Tax the Rich,” making the second bold political statement of the night — amid a crowd of uber-rich people who might not agree. Is it meant to be ironic? She’s with Aurora James of Brother Vellies, who made the — presumably very expensive — dress.

Venus Williams says her Prabal Gurung gown is “very America,” and is inspired by Halston.

The crowd begins chanting “J.Lo! J.Lo!” In Ralph Lauren, she has a hat, she has a train, she has a cape, which she shrugs off. There are a lot of newbies here, but J.Lo is not one of them.

The athletes are showing up tonight. Simone Biles sparkles like none other in Area couture x Athleta, while Allyson Felix, who arrived with Biles, is ethereal in baby blue feathered Fendi. And with an arrival slot right after J.Lo at that. They are having a cute moment when two figures — hooded in black bodysuits zipped up over their faces — silently slink past. Yes, it’s Kim Kardashian and Balenciaga creative director Demna Gvasalia. Momager Kris Jenner waits proudly at the top of the stairs. Another headline moment, secured.

Kendall in — gasp! — yet another naked dress! She walks up the stairs next to Gigi Hadid, wearing Prada, who tells reporters her new baby is home asleep.

“Is the lighting good?” Normani asks before explaining that her mom helped narrow down her options to a marigold Valentino gown. After she finishes talking, she asks videoing reporters to throw a filter on the footage.

While some of the old guard — J.Lo, Kate Hudson, Pharrell — have turned out, it is definitely a night that belongs to the first-timers. Inclusivity: always in fashion.

MORE COVERAGE FROM THE 2021 MET GALA: