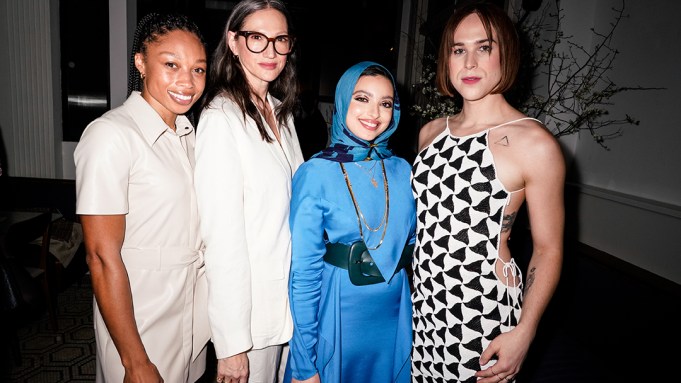 On Saturday afternoon, Canadian jewelry brand Mejuri hosted a pre-International Women’s Day celebration at newly opened Tribeca restaurant Mena. Guests including Charli Howard, Ruby Aldridge and Ella Purnell sipped martinis and browsed the brand’s IWD capsule collection, displayed in the back of the restaurant. Embroidered cocktail napkins throughout the space offered words of encouragement as guests drank coffee martinis: “your identity,” “your signature,” “your story,” “buy yourself the damn diamond.”

“The premise of the brand has always been about empowerment,” said Mejuri founder Noura Sakkijha. “When we started, we said: ‘buy yourself the damn diamond.’ Changing the traditional narrative that jewelry is gifted to more of a self-purchase.”

She noted that the brand likes to go all-out for International Women’s Day, and this year is no exception. The brand is continuing its collaboration with Jenna Lyons, who created a capsule collection of pinky rings. A portion of the sale proceeds will support Mejuri’s Empowerment Fund, and the campaign for the collection features Tommy Dorfman, Allyson Felix, and Noor Tagouri.

“All of these women have their own platform, and they all have amazing messages,” added Sakkijha. “We wanted women who have an impact in their community.”

Earlier in the day, Lyons was at home getting ready for the event when her friend texted her that there was a line outside of the SoHo Mejuri boutique. “She thought it was because of me and I was like, no — my stuff hasn’t launched yet,” said Lyons, who was introduced to the brand by way of her teenaged goddaughters and became enamored with its accessible approach to fine jewelry.

Felix, who’s the mother of a three-year-old and the most decorated U.S. track and field Olympian, had flown into New York earlier in the day from Los Angeles, and was headed back West shortly after the party. “She ran here, and she’s running home,” said Lyons.

Although missing out on fashion week, Felix has plenty to cheer on from Los Angeles: the Rams, competing for the Super Bowl on Sunday, and many of her friends who are currently competing in the Winter Olympics.

“The Olympics are so heavy, there’s a lot of high moments, but it’s also heart-breaking moments,” said Felix, adding that she’s been watching the skiing events and is excited for bobsledding to start. (Lyons, for her part, was fascinated by curling, which opened the Games.)

“It’s really cool because everything’s so different from what I do and so extreme that I’m like, I could never,” added the athlete. “But I have so much appreciation for watching it.”