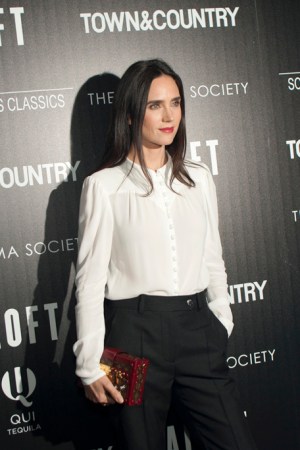 “This film has been with me for almost five years, so it feels quite nice,” writer-director Claudia Llosa chuckled on Monday night. She was at the TriBeCa Grand, where the aforementioned film, “Aloft,” was about to premiere. The film marks the Peruvian director’s first full-length, English-speaking feature, and tells the multi-decade story of a single mother, played by Jennifer Connelly.

The screening was cohosted by The Cinema Society and Town & Country, for which Connelly appears on the May cover. “I thought the character was complex, interesting, and very strong,” said the actress, chic in a Louis Vuitton ensemble by her longtime favorite designer, Nicolas Ghesquière. “I like that she’s driving the story; whenever you think of her, you think of this powerful force.” Connelly plays Nana, the “very complicated and very human” woman who embarks on a journey of healing in hopes of curing her sick son. “Jennifer and I were supposed to sit just for 20 minutes, and we ended up talking there for two hours,” Llosa said of her choice of Connelly for the role.

Moviegoers, including Connelly’s husband Paul Bettany, Tali Lennox, Darren Aronofsky and Mischa Barton, strolled from the hotel over to Ladurée SoHo for a sleek bash in the patisserie’s back garden. Drinks and tiny French bites were passed along as attendees huddled at tables beneath the patio’s lit trees.