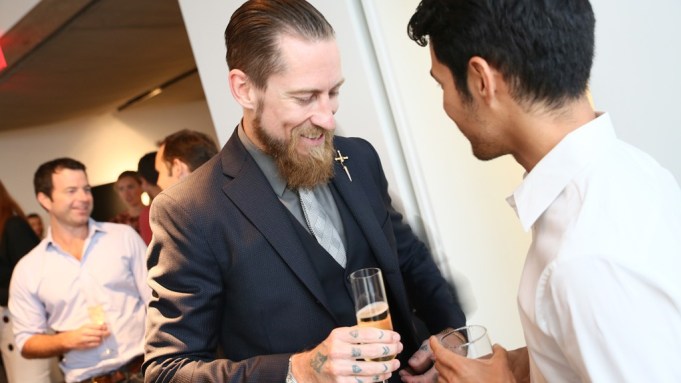 “It’s so simple and so clean,” Justin O’Shea said over a flute of Champagne, his eyes scanning the rolling footage projected on a nearby wall: Agne Konciute stalking down a runway enveloped in a plush black-and-white fox fur coat from Joseph Altuzarra’s fall collection, her chestnut tresses sleekly matted to her head. “That’s all you need: a beautiful girl in a beautiful outfit and you’re instantly transfixed on it.”

There was no shortage of beautiful girls in beautiful outfits populating the Glass Houses of the Chelsea Arts Tower in New York on Tuesday night. A host of scenesters, of-the-moment models and editors descended on the space to fete the film currently playing: a short Altuzarra made in collaboration with MyTheresa.com TV, kicking off the launch of the designer’s fall collection on the online retailer based in Munich.

“I loved this idea of something quite strict. There was a certain strictness that we were really going for,” the designer said between receiving the stream of well-wishers filing into the space. The Simon Cave-directed short was filmed in the designer’s Howard Street studio earlier this summer. “We had to bring all these treadmills into the studio so it looked like she was walking in place,” Altuzarra said. “I don’t even know how they got the treadmills up there. I’m assuming they somehow fit in the elevator but when I got there, everything was set up so it was great.”

Stills from the film dotted the room, which Leandra Medine promptly documented on Instagram. Leigh Lezark thumbed the flat gunmetal buttons of her top while chatting with Waris Ahluwalia, the pair holed up by the entrance. “I just got back from Asia,” Lezark groaned. “Thirty-hour flights, not fun.” Fiona Byrne and Atlanta de Cadenet fluttered about, soon joining Jen Brill, Harley Viera-Newton and Alexa Chung, who held court in one of the gallery’s corner nooks. Emily Baker and Maria Bradley slinked towards a tray of bubbly, while Anya Ziourova made her way toward Altuzarra to say hello. The designer was telling friends how he’s gearing up for the draconian rigor of preshow crunch time. When asked how it all was coming together, the designer demurred, “It’s going well,” he smiled. “It’s going well.”