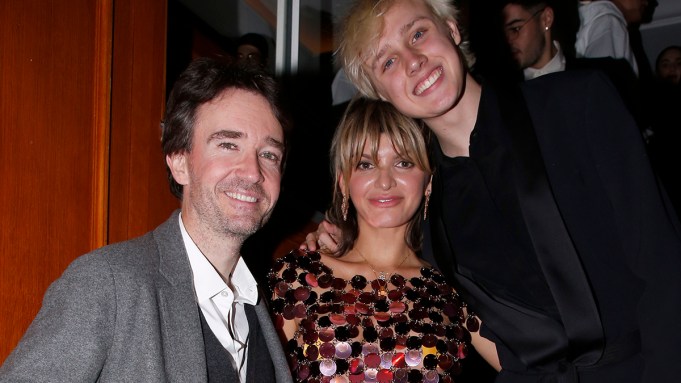 Months of ongoing strikes had left Parisians wanting to group their movements about town, and no one was more proficient at this than Alyssa Volskaya. On Sunday night, the former executive director of the French branch of Natalia Vodianova’s Naked Hearts Foundation offered a three-for-one: a bash in celebration of her birthday, her newly acquired French nationality and the launch of Avec Paris, her newly minted public relations agency.

Guests arrived at Club 13 — a plush private cinema founded by legendary French filmmaker Claude Lelouch and featuring a restaurant and club — in clusters after braving inclement traffic and the last of the men’s wear shows. But Volskaya was philosophical about her new compatriots. “We started a little later than planned, but I admire that French people can speak their mind and make things change in the country. Even if that means I need to hop on a scooter, it’s a small price to pay for that freedom,” she said.

Volskaya arrived in Paris upon completing her secondary education, and after working at Condé Nast International, she was introduced to Vodianova, who hired her for her foundation. “This city gave me a lot — Condé Nast, Natalia, the opportunity to learn — so I want to give back. Avec Paris [a play on the initials Alyssa Volskaya Events and Communication and the French word for “with”] is about everything that’s important today: being with each other, helping and supporting each other.”

Her company will seek to connect communities, humanitarian projects and those wishing to contribute. “I believe connecting people is still a new track. Despite our communication tools, it can be difficult to connect to the causes that matter and are dear to our heart, particularly in France,” she said.

Her previous employer will be among the agency’s first clients, and former boss Vodianova was among the well-wishers. “Hopefully, we’ll still have a place in what will no doubt be a very diverse client list very soon. I always knew she would outgrow us,” said the newly engaged model and philanthropist, who attended the party with fiancé Antoine Arnault and son Lucas Portman, who walked the Balmain show on Friday.

“We first met when I interviewed her for a project manager position at the Naked Hearts Foundation’s French chapter. I remember someone incredibly sharp, very shy but full of enthusiasm, focused and only promising what she can deliver based on her ideas and experience. I hired her straight away. So now, I wish for her to accomplish her vision of her company and all of her dreams. She definitely has my back and we have hers,” Vodianova added.

As three Saint Honoré cakes by star pastry chef Cédric Grolet were brought out, Ukrainian milliner Ruslan Baginskiy, who counts Bella Hadid, Alicia Keys and Kaia Gerber among his fans, wished for Volskaya to “never run out of the most important thing in life: super good friends.”

The event continued late into the night, with performances by French singers Yseult and Kiddy Smile. As some guests spilled out onto the Paris streets, Cavalli blew “one hundred million kisses to [Volskaya]. I wish her so much love because she’s the kindest.”