The star of the Linda Lovelace biopic talked about what it was like to play the late adult film star on Tuesday. 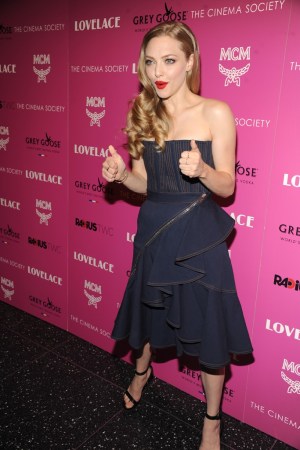 Adam Brody plays adult film star of legend Harry Reems in the new Linda Lovelace biopic “Lovelace.” As he explained at a screening of the film in New York on Tuesday, his approach to the role was well researched.

This story first appeared in the August 2, 2013 issue of WWD. Subscribe Today.

Despite the Seventies adult film industry being at the center of the film, Seyfried said its theme was more profound.

Stone, in a Blumarine gown and “20-year-old” gilded Gucci heels, said taking on the role of Lovelace’s complex mother was a welcome challenge.

“I like the meaty parts,” she said. “You know, I like to take the tough parts. I like a challenge. That works for me. That’s what I’m looking for.” About the movie, Stone said, “It’s a good date movie. It’s fun and up, even though it’s got a lot of complex issues going on. It’s just a cool movie.”

Noth, who wore a suit from the “Sex and the City” set due to his shopping “panic attacks,” said that while he brushed up on the 1972 “Deep Throat” for the movie, “It’s hard to watch a lot [of it]. It’s pretty funny, actually.”

Azaria, who plays an adult film director, said channeling the era was not easy, especially in the wardrobe department.

“It involved a lot of polyester, which doesn’t breathe, so by the end of the day you kind of rip it,” he said. “This is one of those jobs where your wardrobe becomes a prison. At the end of the day, you are like ‘Get this thing off of me.’ I don’t know how anybody got laid in that era. It’s amazing there was that much sex with everybody in polyester. I don’t understand it.”