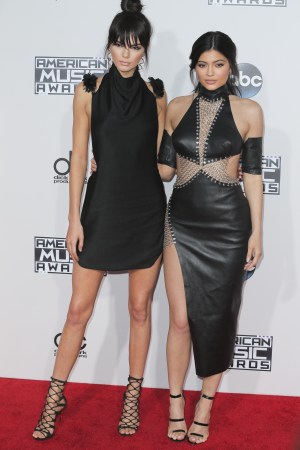 The red carpet at the 2015 American Music Awards, held Sunday at Los Angeles’ Microsoft Theater, had the requisite amount of sheer, sequins, and skin, as well as fashion moments like Harry Styles in a floral Gucci suit, Kendall Jenner in Oriett Domenech, Selena Gomez in Givenchy and Zendaya in Ungaro. Naturally, host Jennifer Lopez donned a parade of sparkly outfits at the three-hour show, which was broadcast live on ABC. The lively show drew an all-star lineup of performers including Gomez, Carrie Underwood, Ariana Grande, Gwen Stefani, Demi Lovato and One Direction, which took home the Artist of the Year honor. Presenters included Prince, Kylie Jenner, Gigi Hadid, Ellie Goulding, Ciara, Chloe Grace Moretz, Hailee Steinfeld and Joe Jonas. Jared Leto and Celine Dion paid tribute to the victims of the recent Paris attacks, and Justin Bieber performed the final act, a medley of his hits “What Do You Mean?” “Where Are U Now?” and “Sorry.”