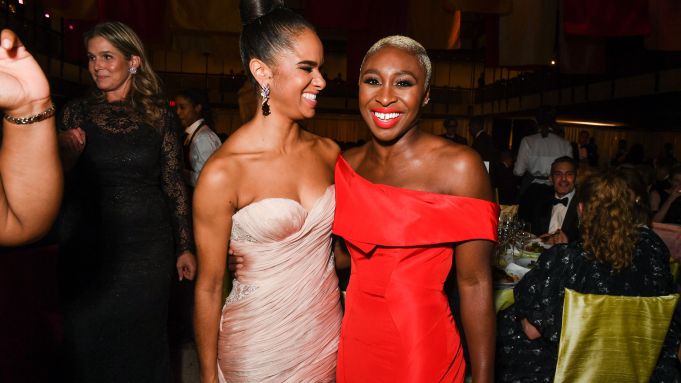 “I have to say the cliché is true,” Michael Kors said outside the David H. Koch theater at Lincoln Center. “We saw Misty [Copeland] do ‘Swan Lake’ and it’s — there’s a reason why that’s a classic, and especially when you see it with her.”

Kors was attending American Ballet Theatre’s fall gala on Wednesday night, which featured the premieres of two ballets, “The Gift” and “Songs of Bukovina.” Principal dancer Copeland took the stage twice; first to present The Melville Straus Leadership Achievement Award to Valentino D. Carlotti, who sponsors her performances with the company and has been a champion for its Project Plie diversity inclusion program. When Copeland took the stage to perform, the program’s young participants in the crowd perked up at the sight of the company’s veritable superstar.

“Misty’s a good friend of mine, so I like seeing her dance,” said Cynthia Erivo, who met the dancer on a shoot. “[Ballet] is something I know I could never do, because I’m just not that way in kind — and I’m not as good a dancer as these incredible people. But I love watching it, because it feels magical.” The Tony winner stopped to greet the producer of the upcoming biopic “Harriet,” in which she’s starring as Harriet Tubman.

Afterward, the crowd moved up to the mezzanine for dinner and dancing underneath red and pink banners.

“I think it’s so important to support the arts, especially right now,” offered Sophia Coppola, who brought Marc Jacobs as her date. The actress is still on the promotional trail for “Beguiled,” which recently was released on streaming and DVD (she’s also working on some writing.) “It’s exciting to be in New York at Lincoln Center and to see the ballet,” she added. “I’m not an expert, but I do have a love for ballet.…I’m obviously going to ‘The Nutcracker’ with my kids.”

“The Nutcracker” was a popular topic among the crowd. ABT’s fall season is only two weeks long, and then the company will decamp to Costa Mesa, Calif., in December for its performances of the Christmas classic.

“Some of my earliest moments were probably going to ‘The Nutcracker,'” said Aerin Lauder, who added that Estée Lauder had just signed Copeland. Lauder’s favorite character scene from the seasonal ballet? Snowflakes, of course. “Every little girl’s dream,” she said.

For More From WWD: