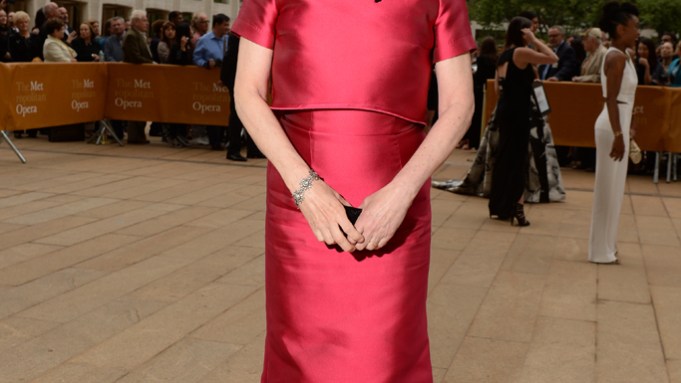 For its 75th anniversary gala, the American Ballet Theatre deemed the event a “Diamond Jubilee” yet it was pearls and crystals that drew the most attention before the exhibition performance. The aforementioned glitzy things adorned a pair of velvet Balmain trousers, worn by street style personality Edmundo Huerta, best known as Di Mondo.

Taking his seat in the fifth row of Lincoln Center’s Metropolitan Opera for the Escada-sponsored event, the sparkling slacks created quite the opening act. “Wow,” Coco Rocha said in monotone, while another attendee flat-out asked for a picture of the pants. “I was going to wear a matching blazer, but Kendall Jenner wore a similar style last night,” Huerta said, referring to the model’s outing in a Balmain for H&M ensemble at Sunday evening’s Billboard Music Awards.

But even Olivier Rousteing’s biggest bedazzling efforts couldn’t distract from the evening’s main event once the house lights went down: a two-and-a-half-hour retrospective of the ballet company’s past 75 years, complete with selected works, video montages and speeches from the likes of Joel Grey and Sigourney Weaver. “Beethoven swore that music is God’s breath,” Weaver said. “If that’s true, then ballet is God’s breath made manifest in the human body. It’s a universal language that can tell a story literally or metaphorically.”

After the performance, which included a crowd-pleasing rendition of Swan Lake Act IV featuring Misty Copeland as Odette, most of the audience, including Jessica Stam, Carly Cushnie and Michelle Ochs, Daphne Groeneveld, Peter Copping, Brian Atwood and Jennifer Creel, made their way over to a pop-up tent adjacent to the theater for dinner.

Over plates of fresh ricotta and grilled fish, attendees compared notes on favorite performances of the night, leaving Copeland, who spent the evening actually doing the performing, at a loss for words.

“I didn’t get to see a lot, since I was on stage,” the dancer said, quickly noting she was gearing up for a new role: Juliet. “It’s hard to explain and translate,” she said of the preparation process. “You learn all the steps, and then you really go into the character.”

Copeland may have some competition on her hands, however. Before the main course plates were even cleared, a majority of patrons had made their way to the dance floor. The music, though, played less to the company’s history than the ballet performance had, with a funk cover band playing hit after hit. The earlier ballet had gotten a deafening round of applause in the theatre, but ultimately it was Taylor Swift’s “Shake It Off” that got the crowd to their feet. Sorry, Tchaikovsky — the players gonna play, play, play.