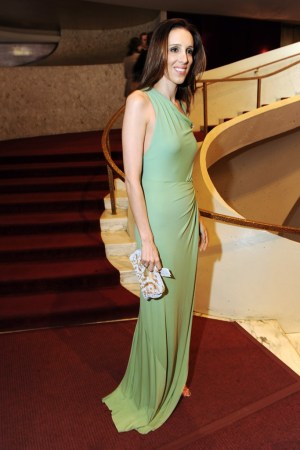 A grip of dance lovers turned out for the American Ballet Theatre’s annual Spring Gala on Monday night at The Metropolitan Opera House in New York City. Among those taking in the program, which included selections from “Manon,” “Swan Lake” and other pieces on the troupe’s spring schedule, were Lincoln Center regulars including Caroline Kennedy, Blaine Trump, Julia Koch and Jamie Tisch, as well as some fresher arts patrons like Alek Wek and Jessica Stam.

“It was really pretty, it was very magical, I enjoyed it very much,” Wek said as she made her way into the dinner tent assembled on the southwest corner of the Lincoln Center campus. “I thought I was tired — it’s Monday; I was working all day — maybe I’ll just slink in and sink into my seat, but I was actually like ‘OK!’”

Attendees in need of further pepping up could indulge in blood orange margaritas made with jalapeno tequila, which would, as a waiter advised one partygoer, “have you dancing in half an hour.” It was a nice proposition as the post-program portion of the evening didn’t get under way in earnest until 9:30. The evening, cosponsored by Valentino and Graff, raised more than $1.7 million.