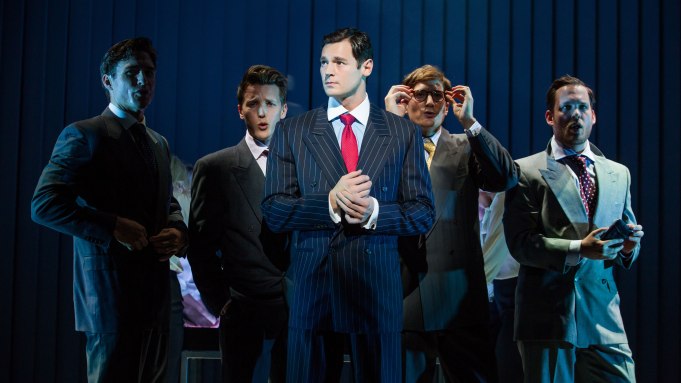 Mr Porter has partnered  with “American Psycho: The Musical,” which debuted Thursday on Broadway at the Gerald Schoenfeld Theatre.

“We like to partner with projects that are clever, entertaining and will appeal to our customers. This one just happens to be a musical,” said Jeremy Langmead, Mr Porter’s brand and content director, who added that the Kingsman line is one of Mr Porter’s top 10 selling brands.

The wardrobe partnership coincides with a content collaboration that includes themed editorials on its newly launched section, The Daily, and an exclusive editorial featuring Walker that will appear in Mr Porter’s weekly online magazine, The Journal, on May 12. The retailer also supported the world premiere of this play in 2013 when it debuted in London.

“Bateman and his social circle, at work and play, are obsessed with the surface value and status of everything around them. It is an obsession which highlights the void that enables Bateman to kill and enhances the dark humour within the piece,” said Lindsay. “To create a real sense of this and the period it felt important to be able to place within the costume world key pieces that are true to everything Bateman is focused on.”

In terms of what Bateman would wear today, Langmead said it wouldn’t be too far off from his uniform in the Eighties.

“Patrick Bateman is a creature of habit, so he would probably still stick to the brands he was fond of in the Eighties including Ralph Lauren and Valentino,” Langmead told WWD. “Bateman and his ilk viewed their clothes as uniforms and battled dress and perhaps the trend for bomber jackets, sweats and sneakers would be seen as a modern-day version of that — for off duty at least.”