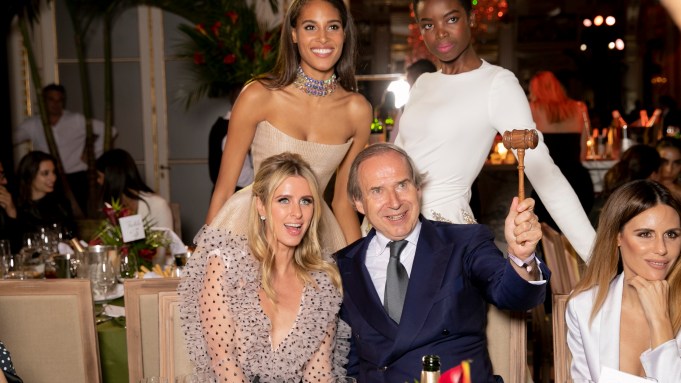 As guests arrived at the Peninsula Hotel in Paris ahead of amfAR’s annual dinner in Paris, Swiss art dealer and auctioneer Simon de Pury was inside, nervous about the upcoming evening — 28 years after his first auction to raise funds for AIDS research (in 1990 in Basel with Elizabeth Taylor and Audrey Hepburn, he recalled). “Every time feels like it’s the first time,” he said. “What if nobody bids?”

Outside, the ambience was more relaxed. Ellen von Unwerth, Nicky Hilton, Angela Lindvall and Cindy Bruna were among those mingling under the patio’s glass canopy. Actress Kathryn Newton was chic in a LBD, delicate strands around her neck, including some pearls from Dior. “They’re my mother’s but I took them,” she said conspiratorially.

Ian Bohen and Tyler Hoechlin, both in Cerruti, were back in Europe together for a second summer to, among other activities, howl at the moon, or at least make an appearance at the second edition of the “Teen Wolf” fan convention of that name in Paris. Earlier in the week, the pair had attended the Dutch leg of the MotoGP championship.

For Hoechlin, it was a first-time experience. “It’s a whole new level of appreciation, thanks to Ian. It’s my new obsession.”

He is on-screen in theaters in “The Domestics,” a postapocalyptic horror flick, where he stars with Kate Bosworth as a couple trying to evade murderous factions in a bid to reach a safe haven.

Bohen, meanwhile, was already a keen motorcycle fan and a seasoned biker. The actor has even ridden recently from Zürich to Vienna with fellow enthusiast Kevin Frost, amfAR’s chief executive officer, to get to the Life Ball earlier in June. Frost revealed that they’d stopped en route at the Swarovski Kristallwelten in Vattens, Austria.

Later that evening, fans in the U.S. had Bohen on television as rancher Ryan in the Paramount series “Yellowstone,” also starring Kevin Costner. This is not the first time the actors have worked together: in the 1994 Lawrence Kasdan “Earp,” they both played the titular character at different ages.

After a heavy couture schedule, Carine Roitfeld was there to enjoy her evening, elegantly sidestepping any questions on whether she’d seen any new names to add to her fashion lineup for the Cannes amfAR auction.

This year’s amfAR cochair Dr. Hermann Bühlbecker, owner of 350-year-old German family-owned chocolate manufacturer Lambertz, surveyed the fashionable crowd with the eye of an expert. “We have our own fashion event called Lambertz Monday Nights,” he said.

The evening was only a short respite for Peter Dundas, whose collection was shown the previous day. This summer he has a pop-up in Mykonos and a temporary flagship on New York’s Mercer Street in the works. “I’m already late on the next collection,” he rued.

While the evening wasn’t meant as a fund-raising opportunity, a friendly auction under de Pury and auctioneer Andy Booth netted $600,000 for the charity. On the block went an oil painting by Paris-based American contemporary artist JonOne, a Plexiglas-and-neon mixed-media piece by Emmanuelle Rybojad, a Happy Ocean watch from Chopard, an oil pastel sketch by Martial Raysse, two invitations for the 2019 Golden Globes as well as a print by photographer Christopher Makos of Andy Warhol.

As American musician Aloe Blacc, who sang on the late Avicii’s “Wake Me Up” anthem, took to the stage, guests could finally unwind, including de Pury. “I’m just as obsessed with music as I am with art,” he revealed.