Naomi Campbell, Donatella Versace, Jennifer Garner, Tory Burch and Adrien Brody were among guests at the event in Paris on Sunday night. 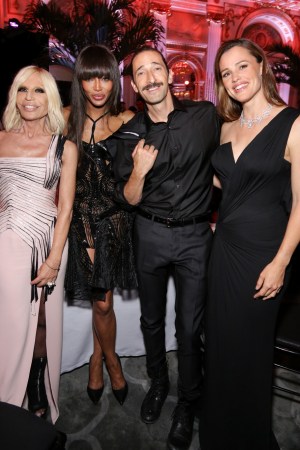 GOOD CAUSE: Naomi Campbell, Donatella Versace, Jennifer Garner, Tory Burch and Adrien Brody were among the guests who turned up at the amfAR cocktail and dinner on Sunday at the Peninsula hotel in Paris.

“This is an opportunity for us to just say thank you,” said amfAR chief executive officer Kevin Frost, noting that the foundation that raises money to combat HIV and AIDS, has many supporters in the City of Light and elsewhere in Europe. “This [event] is quite different [from the big fund-raisers], but we couldn’t pass up putting a couple of things on auction. Don’t you love the Willy Rizzo picture [depicting Yves Saint Laurent in August 1960]? And the Terry O’Neill one [of David Bowie and Elizabeth Taylor in Los Angeles in 1974] is so pretty,” he said at amfAR’s second such event in Paris. “Coming up next, the foundation is traveling to Milan in September and Los Angeles in October. We’re honoring Jeffrey Katzenberg.”

“I haven’t looked [at the lots] yet. I haven’t had time. I’m sure I’ll [get] something,” said Versace, fresh from her Atelier Versace couture show. She posed at a dinner table with Campbell, Carolyn Murphy, Karen Elson and Mariacarla Boscono — all decked out in her label.

“Versace is family,” said Campbell, who was honored by amfAR last month. She’s to start filming in September, explaining it’s “as an actress, not as director — not yet.”

Is acting something she has always wanted to do?

“She’s an actress, come on. She was born an actress. Nobody models like her. Nobody has the charisma like Naomi. Period,” said Elson, who has a second record slated to come out next year. “I’m gonna tour and do all that,” she said, describing her music as “dark and mysterious.”

Murphy, who was with her 15-year-old daughter Dylan, closed the Atelier Versace show. “I was the bride the last time 17 years ago. Gianni was alive. I hadn’t walked [the Versace show] since then. It’s a long time. It was fun,” she said.

The 43-year-old model is launching a magazine, which is slated to hit newsstands on Nov. 1. “It’s photojournalism and journalism about American culture.” On it, she works with Shinola, the Detroit-based company known for its American-made watches, bicycles, journals and leather goods, and Stephen Shore is among contributors. Another part of the staff comes from Colors Magazine, she explained.

“I just got back from Biarritz,” explained the latter.

“My husband is a surfer, growing up in California. He wants to go [to Biarritz] all the time,” Heriard Dubreuil said.

“That’s awesome; is that yours?” asked Brody about Burch’s fish-shaped statement necklace.

Brody has a solo art exhibition opening on July 16 at Galeries des Lices in Saint-Tropez, France.

Redemption creative director Gabriele Moratti was one of the two happy bidders who scooped up the limited-edition boxed set of 23 images of Studio 54 by the legendary nightclub’s in-house photographer Sonia Moskowitz. It went for 55,000 euros, or $61,206 at current exchange.

“I was born in 1978, around the era of Studio 54. I love the Seventies, the fashion, the movie, the music.…I listen to Led Zeppelin and Janis Japlin. Plus, it’s for good cause,” Moratti explained .