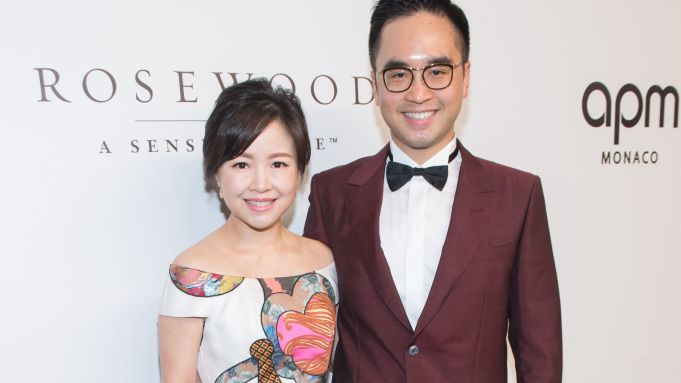 HONG KONG–“I’ve been supporting amfAR for over 18 years, traveling the world in Cannes, Milan and New York, and finally I made it to Hong Kong,” Heidi Klum said at the organization’s Hong Kong gala on Monday. “I’m so excited to be here, I have to tell you!” she added. “I’m having the best time.”

Indeed, Klum has been making the most of her multi-day stay in the city, sightseeing with fiancé Tom Kaulitz and documenting it all on Instagram.

She recalled that she was 12-years-old when she first heard about the HIV virus. “I had my first boyfriend, and we would kiss, and then we heard about HIV and AIDS, and I remember going into the bathroom and cleaning my mouth with soap, worrying about it,” she said. “And now I’m 45 years old, and here we still are with 37 million people still infected with the virus.”

Klum wore Lorraine Schwartz mesh earrings in 18k gold with 32 carats of pink and purple sapphires – and later in the evening auctioned them off for $50,000 to benefit amfAR.

The event also served as the unofficial launch for the brand-new Rosewood Hong Kong. The hotel is part of the 3-million square foot Victoria Dockside district on the Kowloon waterfront. Its developer, Adrian Cheng, was this year’s amfAR honoree.

Cheng told WWD that he was honored and very grateful to be recognized, and that bringing the massive Victoria Dockside development to fruition over the last ten years was especially meaningful because it crossed generations of his family. “My grandfather and my father actually bought the piece of land in 1971,” he said. “The multi-generations perspective is important because it means a lot to us, to the family, [we have] a lot of memories that lie inside this district.”

Rosewood and APM Monaco sponsored the gala, amfAR’s fifth in Hong Kong, featuring a performance by Nicole Scherzinger and raising over $2.75 million for AIDS research.