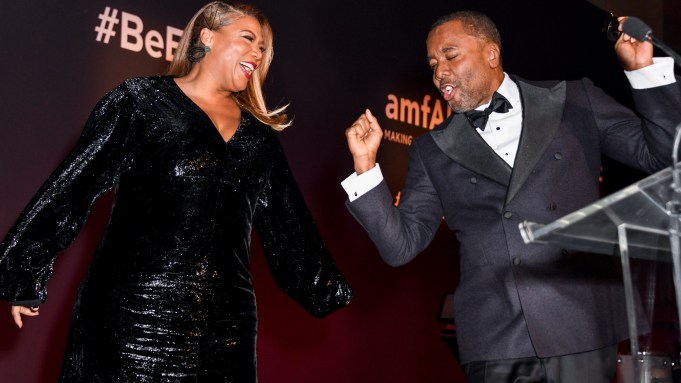 “People are starting to not be really aware of what AIDS did,” said Coco Rocha, clad in blue and making her way into Cipriani Wall Street for the amfAR gala on Wednesday night. “What it has done, and what it can still do. They kind of think of it as some sort of disease that was from the past. But it’s not true,” she continued. “Until there is a cure and everyone’s cured, we still need to be talking about it.”

That refrain was echoed often throughout the night, which honored Lee Daniels and W editor in chief Stefano Tonchi and paid tribute to amfAR founding chairman Dr. Mathilde Krim, who passed away on Jan. 15.

“When Dr. Krim founded amfAR more than three decades ago… there was palpable hysteria and pervasive paralysis and in response to this deadly virus that was growing rapidly. AIDS was on everyone’s minds, but on few people’s lips,” said Kenneth Cole, who closed his opening speech by announcing that he was stepping down as board chairman following months of controversy over a 2015 fund-raising deal with Harvey Weinstein.

Despite the surprise announcement, it was a spirited evening, with plenty of dolled-up models navigating their gowns between the closely packed tables within the hall.

“I always have good memories at amfAR,” said Hailey Baldwin. “It’s an event where a lot of my friends are in the same room, and a lot of really cool people come together; I enjoy hearing people’s stories and people’s speeches. I just think that’s going to be the same tonight,” she continued. “I’m excited to see Halsey perform, I think she’s going to be awesome.”

Baldwin wasn’t the only Halsey fan.

“I have a big crush on Halsey. She’s so dope,” Queen Latifah declared from the stage before introducing Daniels.

The director, producer and writer, whose 2009 film “Precious” earned him an Academy Award nomination for best director, started his career working at a nursing agency in L.A.; he went on to start the first nursing agency under contract with AIDS Project Los Angeles.

The director became emotional while recounting the early days of the AIDS crisis onstage.

“I tried counting last night as I prepared for this moment, and I stopped at about 40 personal friends that had passed on,” said Daniels. “What we need to do right now is think about all of the friends and lovers and family members we’ve lost and really count. If we add up who we’ve lost collectively, it amounts to an entire generation, a lost generation primarily of gay men,” he continued.

“Thank you for the honor, amfAR. It’s much bigger than me.”