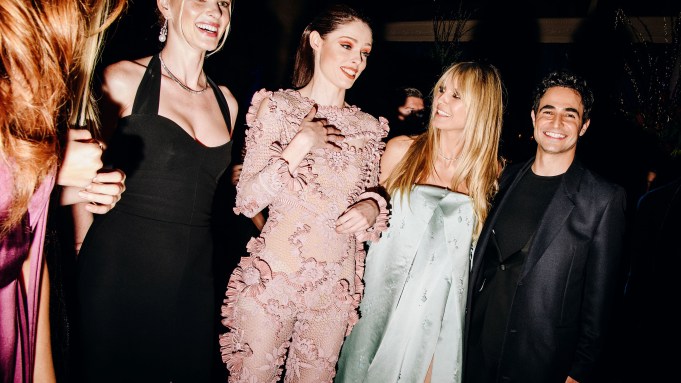 Like in years past, amfAR kicked off fashion week with its annual New York gala at Cipriani Wall Street.

“There’s still no cure,” said Heidi Klum, one of the evening’s many fashion world attendees. “So if there’s no cure, I’m still coming back.”

The organization, which hosts galas in different cities throughout the year, continues to drum up support for its mission of not only finding a cure for AIDS, but also disease prevention and treatment education. On Wednesday night, the crowd included musical duo Sofi Tukker (who also performed), Zac Posen, Ashley Longshore, Dennis Basso, Diplo, Coco Rocha, Lais Ribeiro, Daphne Groeneveld, Devon Windsor and Donna Karan.

Like many there, Klum is in town for fashion week; she’s in New York until Friday filming her new fashion competition show, “Making the Cut.”

“Tomorrow we’re going to visit Christian Siriano,” she said. “Actually, one of my models that I brought today with me is walking in the show tomorrow — she doesn’t know that yet, we did a hidden camera casting today. But I thought it was important for these young girls — and they’re very young, and they want to break into this industry — I thought it was important for them to see what they can do if they feel strongly for something. I think it’s important for everyone to find something they can support.”

Diplo, who later performed a surprise set at amfAR’s late-night after party at 1Oak, continued his current sartorial trend of cowboy dressing, donning an all-white ensemble, complete with a cowboy hat and boots.

“I got obsessed with buying cowboy hats, so I’m just going to wear them as much as possible. If you’re ever working on country music, you kind of have to wear one,” said the musician, who’s releasing a song with Thomas Rhett and Young Thug this month as well as a new Major Lazer album in March. He’s flying to India later this week, and the frequent travel has its payoffs. “The cuff links are very rare,” said Diplo, showing off the safety pins holding the cuffs of his old Gucci shirt together. “I got them from the airport.”

Rocha also came to the gala wearing an outfit she’d acquired through her work travels.

“I walked off the runway in it,” Rocha said of her blush Jean Paul Gaultier jumpsuit, which she modeled at the designer’s finale couture show last month. “He’s always been special to me, so he’s like walk off that runway, and you can keep it.”

The model has been a longtime — and vocal — supporter of amfAR. “I know I’ve in the past worked with people and you feel like they’re doing something but nothing gets accomplished,” she said. “Whereas [with amfAR]…you know that they’ve got it and hopefully one year they have the cure.”

In addition to the expected fashion crowd, the gala drew those from the art and theater worlds, too, as the event honored Iman, gallerist Marc Glimcher and “The Inheritance” playwright Matthew Lopez.

“I love Iman so much,” added Rocha. “I had dinner with her a few weeks ago, and people ask me who is someone I look up to and Iman is definitely one of them. She is so smart, one of the smartest businesswomen I know, but also the kindest human being you will ever meet. And very cleverly funny, so funny. I think she should have her own standup one day.”

Although she kept her speech serious, Iman did standup during dinner to accept the honor.

“For those of us here tonight who are old enough tor recall, we will remember how when AIDS first hit, amfAR was the archangel who led us through these killing fields,” she said. “We all pinned our prayers on amfAR.”

Lopez mulled the idea of courage through the lens of the “Wizard of Oz”‘s Cowardly Lion, and arrived at a few topical comparisons. “I wanted to pardon my speech for a moment to say, it’s quite possible that someone also in need of the label of courage today is Sen. Mitt Romney. If only there was more courage in his party,” Lopez said. “Anyways, back to the speech.”

The evening concluded with an art auction that fetched impressive results — including two Brigitte Bardot prints signed by the actress and photographer Terry O’Neill, won by Condé Nast chief executive officer Roger Lynch and another bidder for $100,000 each — followed by a musical performance by Charlie Puth.