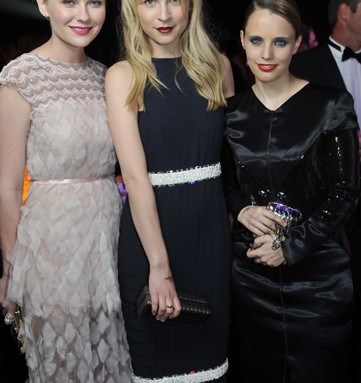 CAP D’ANTIBES, France — The worlds of film, fashion and music joined forces Thursday for amfAR’s annual Cinema Against AIDS gala, the highlight of the busy calendar of social events timed to coincide with the Cannes film festival.

Hosted by Bold Films, Chopard and The Weinstein Company and co-sponsored by Hewlett-Packard Company, L’Oreal Paris and Palisades Tartan, the event set a new record by raising more than $10 million for AIDS research.

While most A-listers pulled up in chauffer-driven cars, Kanye West braved the gridlock at the wheel of a silver Mercedes convertible.

Those staying at the hotel had an easier time of it. “I just sort of walked out, walked the red carpet and kind of came back,” laughed a Roberto Cavalli-clad Rosario Dawson. She confessed she was so enamored with the South of France that she has decided to extend her stay by a week before embarking on the press tour for “The Zookeeper,” due out July 8.

Gwen Stefani also mixed business and pleasure during her stay. In between hanging out on Russian millionaire Roman Abramovich’s yacht with her husband Gavin Rossdale, she shot her latest ad for L’Oreal Paris at a villa overlooking the Mediterranean.

“It’s just like doing little art projects. That commercial I think is going to be the best one we did so far,” she enthused.

Stefani was wearing one of her own creations, a black floor-length L.A.M.B. dress that sold at the auction for 90,000 euros, or $128,500, as part of a Milan Fashion Week package – with a little help from Law, who pointed out the gown was made from rubber.

Patrick Dempsey, in a Ralph Lauren tuxedo, said that despite his role as L’Oreal brand ambassador, he was a low-maintenance guy in terms of grooming, though his wife Jillian hinted otherwise. “Who says he’s not a metrosexual?” she teased. “Men spend the longest time getting dressed.”

Silvia Venturini Fendi reminisced about the hotel. “I have spent very beautiful holidays here. You know, they have the best swimming teacher. My children learned to swim in this swimming pool, which is fantastic,” she said.

It was also déjà vu for Karl Lagerfeld, back at the hotel just 10 days after staging his Chanel cruise collection there. “It is so impeccably kept, the staff are so kind. Among places of this kind, this is perfection,” said Lagerfeld, who dressed Thurman and Dunst for the night.

In addition to providing the décor for the dinner tent – giant black-and-white photo-booth style portraits of celebrities – Lagerfeld offered a prize lot for the auction: a custom-fitted Chanel jacket and a personal portrait session. Faced with fevered bidding, he agreed to double the lot, which sold for a combined 360,000 euros, or $514,000.

Louis Vuitton chief executive officer Yves Carcelle made the long journey from the hotel down to the dinner tent in a wheelchair, after breaking his foot on a recent trip to China.

Once inside, the evening took on the air of a tribute to Elizabeth Taylor, who campaigned tirelessly for AIDS research until her death in March. Among the top lots was an Andy Warhol lithograph of his painting “Liz, 1964,” which sold for 400,000 euros, or $571,000.

But the crown went to Prince Albert of Monaco and his fiancée Charlene Wittstock, who offered personal tennis and swimming lessons, respectively, netting one million euros, or $1.4 million, for the charity.

“You’re too rich and fabulous to be buggered? Unbelievable,” he muttered after failing to start a sing-along.

“I’m shredding my couture,” yelped Love, stabbing her high heels to indicate the tattered tulle hem of her Givenchy dress.

Fonda said she was preparing to release “Prime Time,” a book with Random House, containing advice on how to live well after 60.

“This book is about the lifespan and how to age with wisdom and health and soul. We live longer than we ever have before. The question is why and what are we supposed to do with it?” she explained.