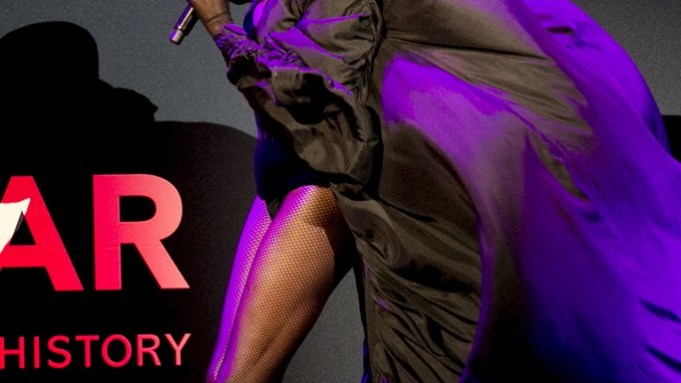 Grace Jones was winding down a performance of her “La Vie en Rose” Wednesday night in New York. She was floating on a high, high stage, all of Cipriani Wall Street rapt beneath her — actors and actresses, socialites, and the kind of high-rollers from the world of finance and philanthropy who earlier in the night put up $50,000 bids during a live auction without breaking a sweat.

At the annual amfAR gala for HIV/AIDS research, the crowd remained respectfully seated through all the initial moving speeches and heartfelt tributes and solicitations to “donate now,” only rising to cheer for Harry Belafonte, who delivered brief remarks, and Vanessa Redgrave and daughter Joely Richardson, both honorees along with photographer Peter Lindbergh.

That is until close to 11 p.m., when Jones made her live appearance, a rarity these days. “Je t’aime,” she cooed to her adoring public, a sprawling black cape billowing behind her.

Later, she almost Hula-Hooped from the raised stage, but she decided against it. She bellowed: “Clear a table!” and climbed on one of the stage-adjacent dining tables, Hula-Hoop in hand, elaborate headdress firmly in place, to perform “Slave to the Rhythm.”

Welcome to fashion week. The amfAR gala revels in its mix of philanthropy and frivolity — there were also performances by Jane Krakowski and Nile Rodgers and Chic — and it has become the unofficial kickoff to the madness of the week ahead, the first of many extravagant parties but surely the one that makes the fashion world feel the best about itself.

“Spiritually, it’s a great way to start fashion week with a great cause, to show that fashion really cares, that it’s not just glitz and glamour,” said Karolina Kurkova. “At the end of the day, we’re all people.”

Poppy Delevingne, nearby and sporting her hair in what she giddily described as a “high pony,” was asked about the reason for her attendance this year.

“I’m here with Louis Vuitton, which is amazing, and I’m obviously here to support the event. You know, AIDS has affected a lot of friends of my parents and I’ve seen people go through it, and it’s horrendous,” she said, suddenly turning serious. She has come to the gala for the past five years. “I came all the way from London just for this,” she said. Hers was a short fashion week because she had to fly back Friday for a family wedding, and it’s just as well because the weather did not suit her.

Rapper A$AP Rocky, who was ubiquitous last season but will mostly sit this one out while he works on a new album, was attending for the first time and came as a guest of Chanel Iman, a regular.

Was the date going well?

“All right,” she said flatly.

There were emotional moments, too. Chelsea Clinton and Kenneth Cole, amfAR’s chairman, poignantly urged continued support for amfAR’s research efforts — the gala, presented by Bulgari and Wells Fargo, raised a total of $1.7 million in ticket sales and a live auction. Redgrave’s remarks packed a powerful punch as she recalled her late daughter Natasha Richardson, herself a tireless AIDS advocate.

“This Sunday, I wanted to watch this small film on the amfAR Web site and as I watched it I heard Natasha’s voice,” Redgrave said, after she was introduced by her daughter’s widower, Liam Neeson. “It was wonderful. And her boys are here tonight and that’s wonderful because they’re the new generation.”

Ethan Hawke, who has been involved with the organization for some time, came also to pay tribute to Redgrave’s late daughter, who had been a friend. Before the ceremony began, he was sipping bourbon, served neat, in a darkened corner of Cipriani. The coincidence of the evening’s timing was lost on him.
“I had no idea it was fashion week,” he said.