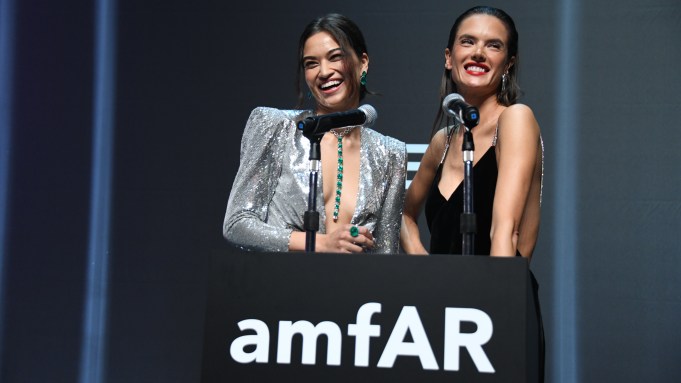 HONG KONG — It was a Chinese gala, but the night seemed to belong to the Australians. AmfAR returned on Tuesday here featuring a performance by pop queen Kylie Minogue, and showings from other famous Antipodean faces, from Liam Hemsworth to model Shanina Shaik, as a power crowd gathered to celebrate the philanthropic efforts of the artist Kaws and socialite Cathy Tsui Lee.

Lee, the wife of Hong Kong property billionaire Martin Lee, was wearing an intricate white gown from Tel Aviv-based couturier Dror Geva. During dinner, she told the audience, which included Michelle Yeoh, Jeff Koons, and textile heiress Veronica Chou, that medical advancements had improved survival rates, but people affected by the disease often live with intense stigma, which she wants to see change.

While amfAR is fighting is to find a cure for HIV by 2020, more than one guest had another social movement on their mind.

Walking the red carpet, the soon-to-be married model Shaik said she was lending a supportive voice to the March For Our Lives. “It’s really scary to think that children can’t go to school and it’s disruptive because of guns. Everybody should be safe and should be able to go to their workplace or learning environment.”

The jeweler Lorraine Schwartz was thinking on similar lines: “I was inspired yesterday by the kids marching in Washington, D.C., to see young kids to make such a statement. It showed me that we do have a voice, when people unite together for a cause. I’m learning from them.”

The night’s auction lots included a fish-shaped art piece by Oscar winner Adrien Brody and time with Monaco’s Prince Albert II, among others, but it was an artwork by Kaws that had the distinction of raising the single highest amount, leaping from $50,000 to $500,000 in a frenzied minute before the hammer was brought down. The final tally of funds raised that night neared $3 million, amfAR said.

In the first of the two musical performances, Swedish singer Tove Lo got up on stage performing barefoot. When it was time for Liam Hemsworth to introduce his fellow Australian, he called Minogue somebody he had “been having dreams about since I was a young, young boy.” The pop queen, who is just shy of her 50th birthday, didn’t need her new Dolly Parton-inspired single “Dancing” to get everybody up off their feet — people quickly leapt up from their tables and thronged to the stage as soon as the staccato chords to “Wow” started playing across the ballroom.