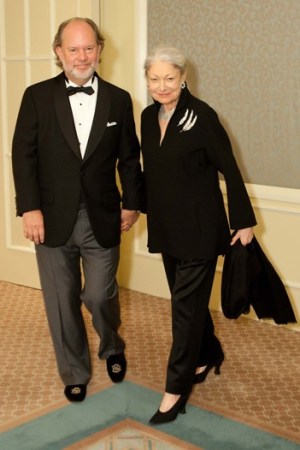 SAN FRANCISCO — Stephen Brady, Gap Inc. executive vice president of creative store design, was honored Friday night by the American Foundation of AIDS research, or amfAR, at a gala here aimed at increasing awareness of AIDS and fund-raising to help find a cure. The event raised $440,000.

“Do what you love,” Brady told the audience of more than 400 people at the Four Seasons hotel, citing advice from the late Gap Inc. co-founder Donald Fisher. He also spoke of his disabled sister, whom he helped to raise. “As a result…I found the importance of family and community,” he said.

Rosen told the crowd that while growing up in Washington, D.C., Brady dreamed of being an ambassador, a destiny thwarted by his first fashion job, dressing windows at Britches men’s wear store in Georgetown. Now, as an integral member of the company, who defines the aesthetic behind Gap, Banana Republic and Old Navy, Brady is an “ambassador of taste,” she said.

Kenneth Cole, amfAR chairman, said the economic climate for AIDS research fund-raising has improved, while the urgency of spreading information about AIDS prevention and raising money for research has increased.

Last week, Kenneth Cole Productions Inc.’s latest AIDS prevention campaign began rolling out for World AIDS Day on Dec. 1. It is built around two styles of rubber boots for less than $100: one below the knee with two buckles that’s unisex, and a woman’s knee-high style with a crocodile-like pattern. The tag line is: “Save a Hide. Wear a Rubber.” All net boot proceeds will go to AIDS awareness.

Among special guests at the gala was model Maggie Rizer, who spoke poignantly about being 14 when her father died of AIDS at age 37. Joined by Cole on stage, the two then helped raise $37,000 in $1,000 pledges from the audience, who were reminded that $1,000 a year pays for life-saving treatments for one HIV-positive child. Earlier, Cole helped raise $20,000 by auctioning a trip for two couples to attend February’s amfAR gala in New York and sit at his table.