The event raised more than $3 million for AIDS research with help from Sharon Stone. 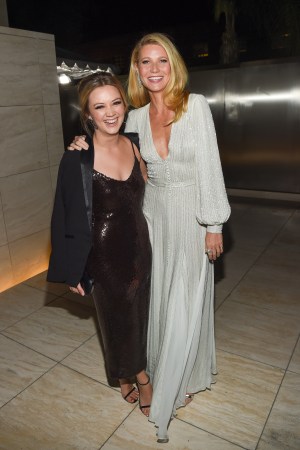 The amfAR Inspiration Gala consistently wrangles some of Hollywood’s biggest stars and Thursday night was no different. Julia Roberts, Gwyneth Paltrow and Lady Gaga were among those who turned up at Hollywood’s Milk Studios, there to raise money and honor television-producer-turned-industry-darling Ryan Murphy.

“Is there any recognition that Ryan’s not deserving of? You could give him an orange cone in the middle of the road for best parking,” said his frequent collaborator Sarah Paulson, who had an early call-time the next morning for Murphy’s “American Horror Story.” “That’s OK. I’m playing a heroin addict. I can have a late night and still do what I’ve gotta do.”

“They told me to wear a mask,” said Curtis of the invitation, which requested “black-and-white” ensembles with “masks optional.” “But everybody is making fun of me for having one.”

Once inside, the night was all about raising cash for the cause. “It’s auction time,” announced Paltrow, who played emcee. “You know what that means, millionaires and billionaires. They’re going to come hard after you guys.”

True to Paltrow’s promise, Sharon Stone led a spirited live auction that helped push the night’s total to $3.1 million. “I have been doing this since before some of you were actually born,” Stone said, before calling Jaime King to the stage to model a pair of Harry Winston diamond earrings set in platinum. As bidders debated the purchase, Cuba Gooding Jr. called out: “Show me the money!”

“Is it a school night for anyone else here?” quipped Paltrow, as she returned to the stage. Apparently the night was far from done. Julia Roberts presented the award to Murphy, with whom she collaborated on “The Normal Heart.”

“What a beautiful night to be part of,” the actress reflected. “Ordinarily in a situation where I need a speech, one that is clever and touching and personal and on all levels fabulous, I would call my brilliant writer friend Ryan Murphy to write it for me, and then I would take all the credit. However, tonight there’s no such luck.”

“I’m very honored to be here tonight as amfAR’s big gay of the year,” said Murphy, who then got serious when discussing his personal experience with losing friends to HIV and AIDS in the Eighties. “If I could go back in time and tell my 18-year-old self that I would be alive in 2015 and receiving this award, that young man would not have believed it.”

And, with that, Lady Gaga, who stars on this season of “American Horror Story,” graced the stage for a 45-minute set. Paltrow quietly slipped out while the singer performed various jazz standards — it was a school night after all. “Are you guys all having fun tonight?” Gaga said, before dedicating a song titled “Call Me Irresponsible” to the man of the hour. “Since I met Ryan, I have rediscovered something in myself and it’s my favorite part of me, so thank you.”