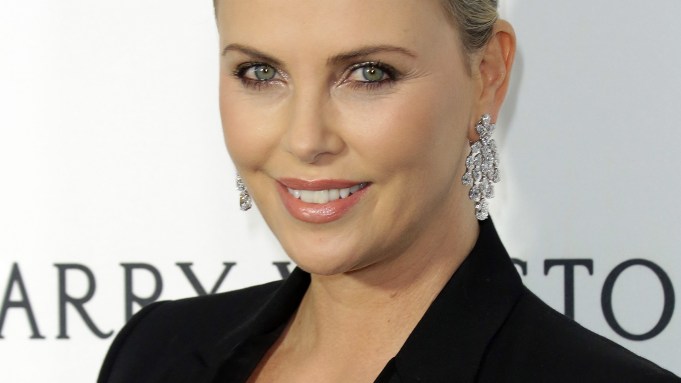 At its seventh annual Inspiration Gala Los Angeles, held at Milk Studios in Hollywood, amfAR honored Charlize Theron and studio mogul Jeffrey Katzenberg. Theron, typically known for her acting chops, philanthropy work and svelte frame, is this year sporting an extra 30 pounds for an upcoming role in a film which is still under wraps. “I want to support her, but I have a bad back,” said her friend and award presenter Chelsea Handler.

Barry Diller presented Katzenberg’s award, recalling the time when, as Diller’s then-assistant, he sourced 29 uncut diamonds for Diane von Furstenberg’s 29th birthday. But given that the presidential election is two weeks away, Katzenberg’s acceptance speech quickly turned political. “If intolerance wins, amfAR and all it stands for loses,” he said.

When it comes to her own organization, the Charlize Theron Africa Outreach Program, the actress apparently plies deep-pocketed friends with liquor before soliciting $100,000 donations to aid her cause. Of Theron’s methods, Handler joked, “She’s like the Bill Cosby of philanthropy.”

Theron spoke of the importance of helping the most stigmatized AIDS patients, including sex workers. “We have to ask, ‘Who are we missing when we talk about AIDS?’” she said.

Jason Derulo then took the stage, bringing the honorees and attendees like Courtney Love, Cheyenne Jackson, Kenneth Cole, Lea Michele, Dita Von Teese and Heidi Klum to their feet to take in his performance. As his hit “Talk Dirty,” ended, the heat became too much — Derulo lost his blazer, and his shirt’s buttons were next to go. As for the crowd, those requiring a cooling drink post-show were met just outside with a nightcap.