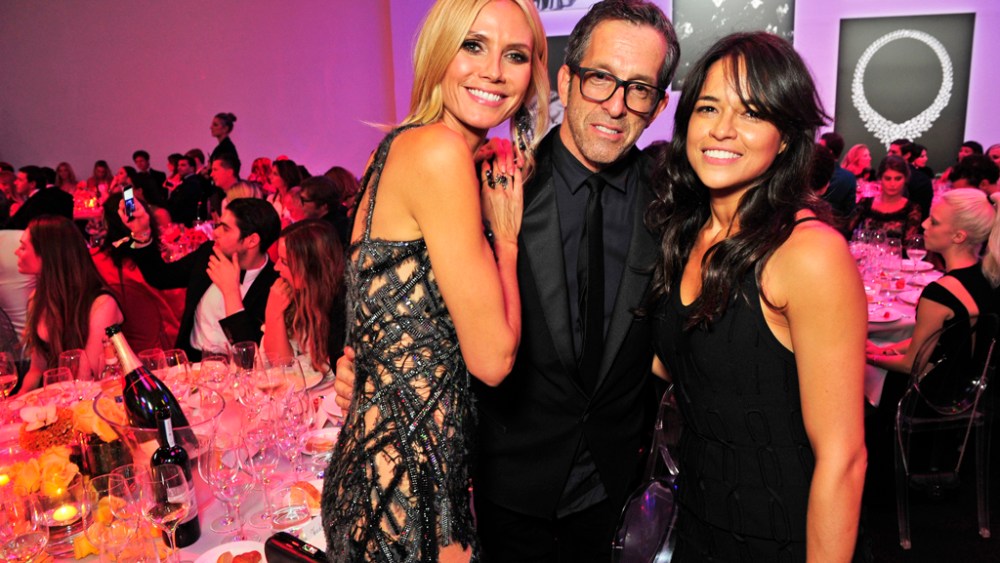 MILAN — The amfAR gala in Milan on Saturday raised a record amount for the Italian event, with the auction portion of the evening stretching past the witching hour.

Dakota Johnson, Ciara, Michelle Rodriguez, Naomi Campbell and Heidi Klum were among those who lent their star power to the black-tie dinner, which secured more than $1.6 million for the amfAR Institute for HIV Cure Research.

Johnson has spent quite a bit of time in Italy lately, most recently premiering “Black Mass” at the Venice Film Festival and touring the country with the Black Keys (her best friend is married to the band’s drummer).

Apparently, what happens on the road stays on the road. Asked about the highs and lows of being with the band, she demurred: “I can’t tell you that!”

Ciara arrived with Peter Dundas, wearing a gown from his first collection as creative director of the Roberto Cavalli label. As amfAR staffers helped to arrange her billowing train, she strutted up and down the red carpet as if on a runway.

The singer was excited about her cover version of the Rolling Stones’ “Paint It Black,” which can be heard on the trailer for “The Last Witch Hunter,” a fantasy movie starring Vin Diesel. “I’ve always wanted to kind of, like, push a little bit and go in an unexpected place,” she mused.

Fresh off his runway outing, Dundas was the evening’s designer of choice, dressing a dozen guests, including Natasha Poly and Elena Perminova.

Rodriguez auctioned off an opportunity to join her on a speedway track in Las Vegas to race cars including a Ferrari, Lamborghini and Aston Martin. “I’ll throw in some time at the range, if you like shooting guns,” drawled the actress, wearing a form-fitting black Azzedine Alaïa dress.

Rodriguez said she was excited about rumors that more female characters would be added to the cast of “Fast & Furious 8,” set to shoot next year.

“I love it, and I hope that we’re not fighting, because in the history of film, I feel like we’ve been beating that dead horse over and over again. I think that Disney got it right with movies like ‘Brave’ and ‘Frozen,’ and it’s time for the adults to get it right,” she said.

“I would not do the movie, just because of that. It’s because I’m tired of this message of girls fighting against each other,” she added.

As if on cue, the auction began with clips of female film characters engaging in violent fights — no further explanation provided. “To be honest, I have no idea what we just watched or how that has anything to do with amfAR,” Klum said as she took to the stage.

The former Victoria’s Secret Angel this week unveiled her latest campaign for Heidi Klum Intimates, which highlights her playful side.

Kenneth Cole, chairman of amfAR, is accustomed to posing next to the 5-foot, 9-inch stunner, one of the charity’s most faithful supporters.

“They asked me if I would agree to be photographed with Heidi, and I said, ‘Well, we actually haven’t been photographed together in over a week,’” he said.

The fashion crowd bid generously at the event, sponsored by Harry Winston, with an after party presented by Vionnet. Renzo Rosso, president of Italian fashion group OTB, paid 150,000 euros, or $168,000 at current exchange, for the opportunity to have a Fiat 500 customized by Lapo Elkann’s Garage Italia Customs design team.

Campbell presented Rosso with the Award of Courage for his commitment to the fight against AIDS, while Debbie Harry and Swedish electro-pop duo Icona Pop performed. The Blondie singer began her set with a public service announcement.

“My friend has had a little accident with his pants, and I don’t really mind, because it’s in a very provocative place, so it could just stay that way,” Harry said, glancing over at her bandmate Matt Katz-Bohen. “So if you have any advice, please come and see us later.”