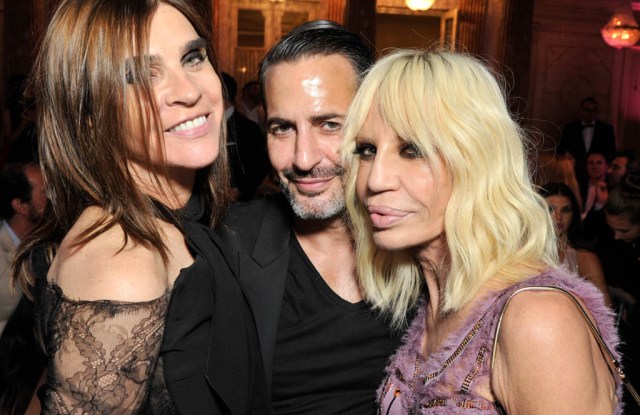 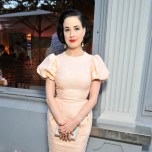 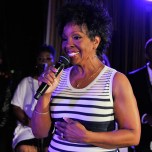 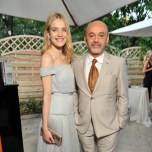 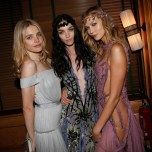 STATE OF THE ART: AmfAR has landed in Paris.

The charity event raising money to combat HIV/AIDS feted its first Paris edition on Sunday night, though the party’s hostess Carine Roitfeld insisted: “This is totally different. We just wanted to say thank you to all those people who have supported us year after year after year,” she said in a body-hugging black Versace gown, which turned out to be the evening’s hottest brand.

“I came straight from the Versace couture runway,” said Karlie Kloss, still wearing her exit look, which was matched with a pair of chunky Seventies platform sandals.

“I know you are tall, but I might be shrinking,” exclaimed Marc Jacobs, peering at the model from below.

Kloss was her self-effacing self. “On a regular night I’m around 6-foot-1, but tonight is a special night — these shoes must be at least 7 inches. I’m an avatar tonight,” she laughed, before posing with Donatella Versace, Doutzen Kroes, Joan Smalls, Rosie Huntington-Whiteley and Mariacarla Boscono — all in Versace — for a group picture.

The Italian designer also provided the winning bid for a unique Polaroid print Andy Warhol had taken of her brother Gianni, part of a bunch of art works that were auctioned off for the good cause.

Naomi Campbell and Natasha Poly were bidding for a sensual Douglas Kirkland photograph of Marilyn Monroe, though it was eventually Chopard’s copresident Caroline Scheufele who went home with the piece.

Other guests at the event, which also featured a live act by Gladys Knight, included Michelle Rodriguez, Lily Donaldson, Anthony Vaccarello, Dita Von Teese, Goga Ashkenazi, Antoine Arnault and Natalia Vodianova, who was spreading the word about her difficult advancements with The Naked Heart Foundation.

“We are opening 10 more playgrounds in Russia this summer and are expanding our educational program for children with autism to under-school-age children, starting at two years old,” she stated in a pale green Ulyana Sergeenko gown. “You know, in Russia it’s still an experiment — the government accepted autism as a [neurodevelopmental] disorder only in 2007,” said the model-turned-philanthropist.

Nicky Hilton divulged she was in town for the final fitting of her bridal dress. “I’m getting married on Friday — in London,” said the hotel heiress, who is engaged to James Rothschild of the Rothschild clan.

“It’s traditionally beautiful, and it’s my dream dress. I’ve been imagining it since I was a little girl,” said Hilton, but kept mum about the designer.

Paz Vega said she had the pleasantly difficult task of scouting some red carpet looks for the upcoming premieres of “Emperor,” also starring Adrien Brody, and “All Roads Lead to Rome,” a romantic comedy in which she appears opposite Sarah Jessica Parker.

“I play an Italian journalist, who goes to where the action is. It’s fresh and it’s funny, it’s great,” said Vega, adding: “You know that I studied journalism, right? But I don’t know what happened. I guess I thought acting was more fun.”