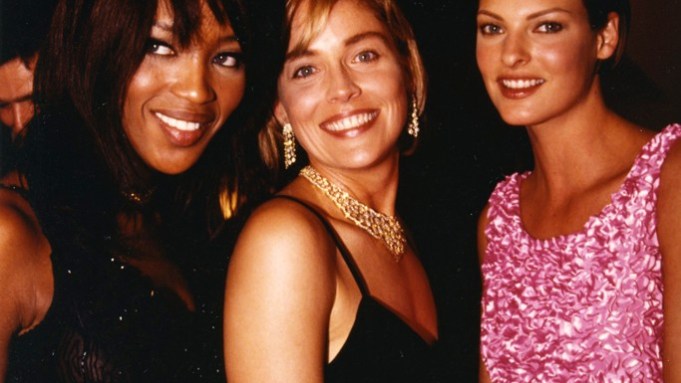 As anyone who has been to one of amfAR’s star-studded Cinema Against AIDS galas can attest, the great attraction of the event is that anything can — and pretty much does — happen.

Sharon Stone might climb onto the lap of Prince Albert of Monaco to cajole him into bidding for tennis lessons. Musicians ranging from Kylie Minogue to Sir Elton John will jump on stage to perform an impromptu song or two. One year, Heidi Klum demonstrated her massage skills on a shirtless Kenneth Branagh and James Caan.

This year, the atmosphere promises to be equally electric as amfAR celebrates the 20th edition of the fund-raiser, held during the annual Cannes Film Festival next month.

“This event is unique, because I don’t know if there’s any like it, where you really have so much of the best of our culture converge in one place, at one time, and create something so extraordinary,” amfAR chairman Kenneth Cole told WWD.

“We always go into this thing with a sense of what’s going to happen, but no absolute plan. We know who’s in the room, and people are given a chance to get involved in the evening. It’s unscripted, and it feels very organic and it’s very inspiring,” he added.

Judging from the list of event chairs, this year’s guests will be as heavyweight as ever. In addition to Cole, Stone and Klum, the co-chairs include Janet Jackson, Jessica Chastain, Roberto and Eva Cavalli, Milla Jovovich and Harvey Weinstein.

Ramping up the fashion quotient, Carine Roitfeld — with the help of Naomi Campbell — is organizing a fashion show that promises to be bigger than the inaugural catwalk event she staged last year. Some 40 models will parade in all-gold looks specially designed for the occasion.

The models will also sport gold jewelry from emerging and established jewelers, among them Bulgari, House of Waris, Kimberly McDonald and Hoorsenbuhs, courtesy of the World Gold Council’s LoveGold initiative, which has come on board as a sponsor this year.

Roitfeld said the show was inspired by amfAR’s late founding international chairman, Dame Elizabeth Taylor, whose dedication to fund-raising was rivaled only by her love of precious jewels.

“I picked the gold theme because gold is extraordinary,” Roitfeld explained. “Since it is the 20th year of this event, I thought people should walk away with an incredible memory. For me, this is really a tribute to Elizabeth Taylor. When you think of her in ‘Cleopatra,’ you have this very powerful image of gold and beauty.”

Cavalli will provide the design and decor for the gala dinner, held at the Hôtel du Cap-Eden-Roc in Cap d’Antibes, while Moncler will sponsor the after party. The tent will feature a retrospective of photographs by Annie Leibovitz, who shot Cole’s first AIDS-awareness advertising campaign in 1985.

Guests will also see a clip from the documentary “The Battle of amfAR,” executive-produced by Cole, which tells the story of how Taylor and research scientist Dr. Mathilde Krim joined forces to fight AIDS. HBO has bought the rights to the film, which it plans to screen later this year.

Andy Boose, who is producing the event for the 18th time, said guests would be asked to come 30 minutes early to make time for all the evening’s planned events.

“They’re going to be there for a while, but they’re not going to be bored, I can tell you that much,” he said. “We’re planning everything to be a notch above what it usually is this year, because it’s the 20th year — so more performers, big performers, a bigger fashion show. We’re looking at every aspect of it to upgrade and make it exciting.”

The event has come a long way since its early days at the Moulin de Mougins restaurant in the hills above Cannes.

“It was very casual. Everyone would just kind of jam into the biggest room. There wasn’t even a microphone,” recalled Boose. “We auctioned off the belly ring that was in Naomi Campbell’s belly, because we didn’t have anything else to sell.”

For Cole, the most satisfying aspect is that the organization’s efforts are starting to bear fruit. Research published this year revealed that for the first time, a baby born infected with HIV is believed to have been cured of the disease.

“After you’ve worked at something so long, you’ve called upon people for so long and people have risen to the occasion, it’s nice to be able to show them what we’ve been able to accomplish because of their support, and hopefully, with their continued support, what we can still do,” said Cole. “People get dressed up and they look good, and at the end of the day, they also know they’re going to do good and something important is going to come from this.”