More than $1 million was raised during the night's live auction. 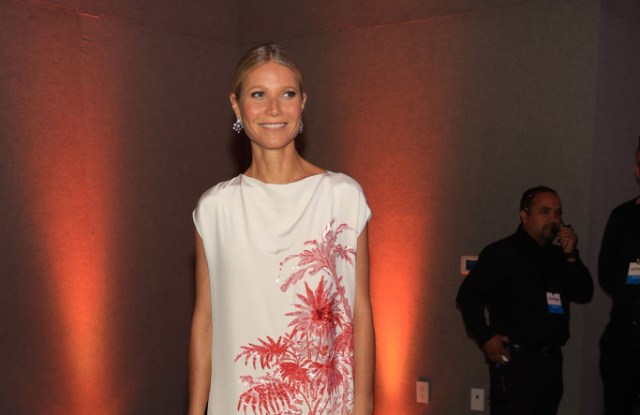 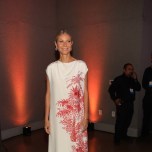 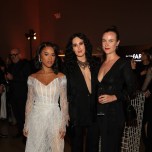 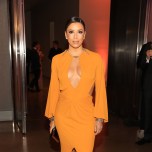 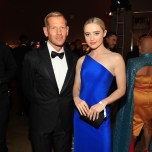 “She inspires us always and her endless accomplishments are universally recognized,” said actor, writer and producer Dan Bucatinsky of Gwyneth Paltrow alongside his husband, director and screenwriter Don Roos, on stage at amfAR’s Los Angeles gala on Thursday night inside Milk Studios. The actress was being honored for her work with the nonprofit, which works to support AIDS research and HIV prevention. “She’s also someone we’re so fortunate to call our friend.”

“My friend, my friend first…” jumped in Roos.

“No, no, no…actually you and Gwyneth just worked together,” Bucatinsky said. “That’s not really a friendship. She’s kind of a colleague. But with me, it’s pure love.”

“You do know she’s won an Oscar for making people believe things that aren’t true,” Roos responded to a room of laughs.

“Whatever, I met Gwyneth in 1999 when I directed her in a movie that I wrote with Ben Affleck,” he continued, referencing the romantic drama “Bounce.” “This is a good chance actually to sort of make amends with Gwyneth, because I had kind of a crush on Ben Affleck. I would say ‘Cut,’ and I’d go up to them and say, ‘Ben, you were amazing, such levels…just the whole way your face is arranged.’ And Gwyneth would stand there like, ‘Anything for me?’ and I’d say, ‘Sorry, I wasn’t looking at you. I’m sure you were fine’….This is me saying I’m sorry. It wasn’t intentional. He just kind of pops on screen. It’s not your fault. You’ll get there.”

Bucatinsky gave an eye roll: “Gwyneth, I’ll call you tomorrow and apologize for this entire thing.”

The actress was sitting nearby, laughing along with husband Brad Falchuk. When she stood to accept the honor, a more serious tone filled the room.

“I didn’t prepare anything, because I don’t think I really believe in thank you speeches, but I did want to thank amfAR for this,” she said, as she held the organization’s Awards of Courage. “I feel very humbled and very undeserving and very appreciative. I believe in so much of amfAR’s work and have done and will do whatever I can do to keep supporting the work until there is a cure for HIV and AIDS.

“Courage is something that I strive to have all the time,” she continued. “Since I’ve turned 40 [years old], I’ve sort of found the courage to be really who I am and speak from the truest place….This particular award is very meaningful.”

The other honoree of the night was art dealer Larry Gagosian, who was absent. Instead, friend and musician Robbie Robertson accepted the award on his behalf.

“Larry sends his deep regrets that he couldn’t be here tonight, because he is on a hot lead to score a fantastic deal on the Mona Lisa,” joked Robertson. “As Larry says, ‘Business is business. This could be big.’”

More than $1 million was raised during a live auction that followed. The largest bid of the night by a single individual was $140,000 for a custom-tailored suit by Tom Ford and front row seat to an upcoming fashion show. Other items included the chance to party hop with Prince Albert II of Monaco during 2020’s Oscar week; paintings that included a piece by L.A.’s contemporary artist Jonas Wood, which went for $130,000; tickets to Paltrow’s San Francisco Goop summit, as well as a portrait photograph taken with the actress (two bidders were accepted, at $80,000 each); and tickets to The Xperience, Christina Aguilera’s Las Vegas residency. Aguilera, who was in attendance as amfAR’s much awaited headlining performer, brought everyone to their feet with hits like “Ain’t No Other Man.”