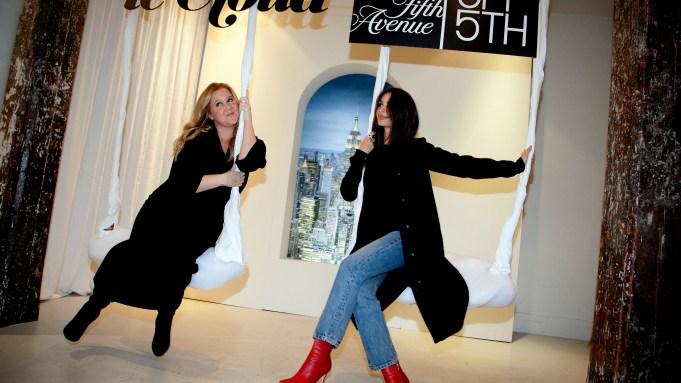 Amy Schumer and celebrity stylist and costume designer Leesa Evans were counting down the hours until the launch of Le Cloud, their ready-to-wear collection of wardrobe essentials for women of all shapes and sizes, that’s exclusive to Saks Off 5th. The brand launched at 10 a.m. Thursday on saksoff5th.com and is being sold at two Saks Off 5th stores in Manhattan and Los Angeles.

At the launch party for the brand at a private residence at 199 Lafayette Street in Manhattan, Schumer said she and Evans planned to hit the Saks Off 5th store on East 57th Street in New York for the launch.

And what time will she be there? “Whenever I wake up,” Schumer laughed.

Watch: Amy Schumer Is The Fashion Guru You Didn’t Know You Needed

The actress and comedian said her favorite look in the collection was the pullover with zip and the track pants and described the line — which includes cashmeres, dresses, a jumpsuit, outerwear, pants and tops — as sexy, sophisticated, cozy, affordable and essential. With sweatpants being among Schumer’s favorite looks, Evans said she set out to find a way “to mix style and sweatpants.”

“It’s been real fun and we’re so excited to keep going,” said Evans, who first met Schumer on the set of “Trainwreck,” when Evans was the costume designer. She said they would like to eventually do puffers for their pets, accessories and men’s clothes.

“I love Amy and everything looks great. I just wanted to support her,” said Bayer, a former “Saturday Night Live” cast member who’s moving to Los Angeles to further pursue her film career.

Seinfeld said she rarely goes out at night, but wanted to support a great friend, adding, “Everything Amy does, she has people less fortunate in mind.”

Thirty percent of net proceeds from the sales of the collection will be donated to Community Partners, a not-for-profit organization in support of the Stylefund project, a program Schumer and Evans founded in 2017 that aims to empower women to use clothing to increase their confidence and their success.

“We love it and it hits all the right notes — inclusivity, women’s empowerment and fashion for everybody. Amy has been a great partner,” said Marc Metrick, president of Saks Fifth Avenue and Saks Off 5th. Asked if the collection will be an ongoing venture, Metrick was optimistic. “Let’s get it going and see how we do. Amy has been great on social media and talking about it. It’s the biggest searched brand on saksoff5th.com, and we haven’t even put it out yet.”

Schumer is expecting her first baby in the spring and has been suffering from hyperemesis gravidarum, an extreme form of morning sickness, while continuing her stand-up comedy tour. While posing with Theroux and Hammer for a photo, she pointed to Theroux and quipped, “He’s the father.”