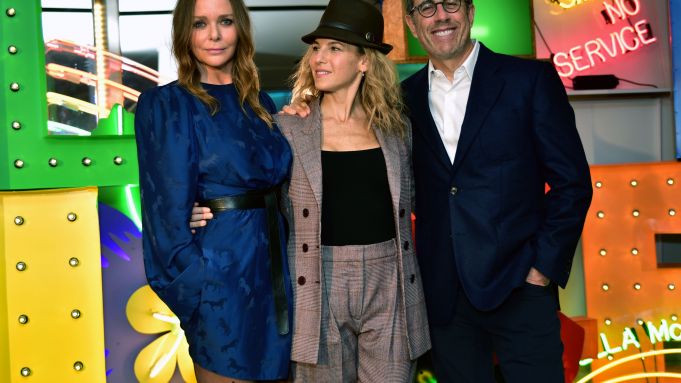 The holidays are for Stellabrating.

“I’m here to celebrate our cover of Vogue,” said Amy Schumer, taking the stage on the store’s lower level. She was clutching an issue of the magazine, which she’d doctored to include a cutout of her face alongside McCartney and her children. All jokes aside, Schumer’s true role became clear: She was there to do the honors of pushing the button to illuminate the store’s holiday lights.

“Amy kindly said she’d turn them on for me,” said McCartney, who has a tradition of tapping one of her many comedian friends to turn on the lights each year. “That’s a good girlfriend, that comes out and does that and then goes home to her baby.”

The designer was last in town during Halloween, and had such a great time she decided to decamp Stateside this year for her Stellabration and the launch of her vegan Stan Smith sneaker collaboration. A pair of sneakers had been frozen into a block of ice, which accompanied the rainbow ice luge (and tequila) on display. The store was also lit up from the inside out, with buckets of flashing star-shaped pins, studded bracelets, and sunglasses for guests to transform themselves into their own walking light show.