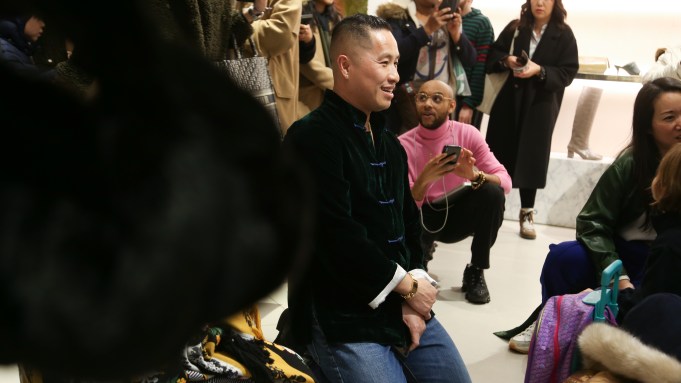 NEW YORK — “No RSVP, no rush, no stress.” The crowd attending on Monday the 3.1 Phillip Lim public event at the brand’s New York flagship on Great Jones Street definitely got the memo.

The mood was relaxed, fun and cheerful at the store, where Lim showcased the brand’s fall 2020 collection.

The designer, who after 13 years of runway shows decided to take a break from the catwalk, “to take a moment to breathe…to think about the act of joyful creation again,” as he told WWD a few weeks ago, definitely didn’t leave anything to chance in the organization of the event, which according to 3.1 Phillip Lim chief executive officer Wen Zhou was conceived in only a couple of weeks.

“When he has a challenge, he always overdelivers,” Zhou said, referring to Lim’s dedication and attention to detail. For what the company described as a “house party,” Lim asked his longtime music collaborator Sebastien Perrin to develop a customized playlist and tapped botanical artist Sophie Parker to create a beautiful installation with joyful hand-painted tropical plants. In addition, tequila cocktails were served to the guests.

Fully aware of the importance of community engagement for the brand, Lim was satisfied with the format he chose to present the fall collection. “We have from the students to the grandmothers visiting from the West and East, their kids who study here,” he said, stressing the inclusive approach of the event.

Later in the afternoon, Lim and Zhou met five- and six-year-old children from a local school, who, accompanied by their mothers, asked them questions about their career in fashion. “They will have to write a school report about this,” Zhou said.

While camera-ready Instagram star dog Jiff the Pomeranian was posing with 3.1 Phillip Lim bags, guests were both checking out the new collection and trying on pieces of the lineup currently in store.

“I just love the fact that you can come in a store and actually see and touch clothes that in a normal situation most of the people would just see through a screen,” said Esteban Gomez, who works in real estate in New York. “The thing that I love the most is the fact that Phillip is here and that reminds me of those fashion shows of a long time ago when the designer was actually present in the room and was introducing the models, the clothes, speaking about the garments. I think this is very significant and it’s a powerful statement that Phillip is giving. I think it’s a very honest approach to the business and look around, everybody is smiling, everybody gets the phone out. It’s truly democratic!”

Chicago-based Lisa Bubes, who manages a fashion software company, sounded enthusiastic about the event. “I love the presentation, I think it’s very approachable. The environment is really friendly and you can actually see the collection,” she said.

Fashion-wise, Lim wrote a love letter to New York City for fall. “We went back to why this brand was born is New York. It’s this idea of going back to old street-style photography where in every corner of this city you find an eccentric bird,” said the designer, who tapped London-based photographer Piczo to shoot the lineup. “We traveled the city in every corner, we used New York City as a backdrop to capture what this city is and why it’s so special and what New York style is: it’s functional, elegant, there is a bunch of street cred, it’s colorful, no one is from here and in every neighborhood there is beauty and grit. Everybody complains about New York but nobody can leave it.”