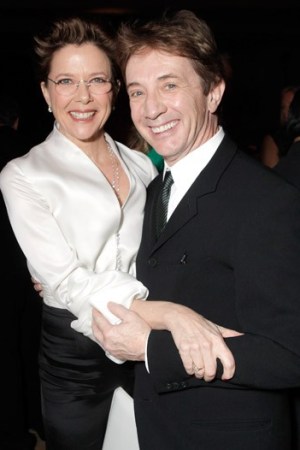 Even though the 400-plus guests at the Beverly Wilshire hotel caused a traffic snarl in the driveway, this year’s An Unforgettable Evening had more the vibe of an intimate family gathering than a generic charity gala.

Thursday night’s Entertainment Industry Foundation/Women’s Cancer Research Fund event was heavy on stars and socials, but many were actually old friends. Martin Short, there to accept the Courage Award on behalf of his late wife Nancy Short, summered in East Hampton with Kate Capshaw and Steven Spielberg. Nat King Cole Award honoree Annette Bening, who has been burning up the Oscar campaign trail as of late, was relaxed as she chatted with Kelly and Ron Meyer while her husband Warren Beatty, caught up with Billy Crystal and Kirk Douglas.

“It’s different every time,” she said of her fourth go-around as on Oscar nominee. “I’m having so much fun this time.”

Jamie Tisch made sure all her children and their friends had tables in the back and seats on the floor up front for the musical performance. Conan O’Brien, taking over the gig from longtime host Tom Hanks, kept the room amused even when delivering the news that the night’s entertainment, Rihanna, would be unable to perform due to the flu.

“That’s OK, because Warren Beatty, Billy Crystal and I are going to sing our rendition of ŒUmbrella,’” he joked.