Victoire de Castellane, Vincent Darré and Gildas Loaëc turned out on Friday night for an intimate dinner and tour. 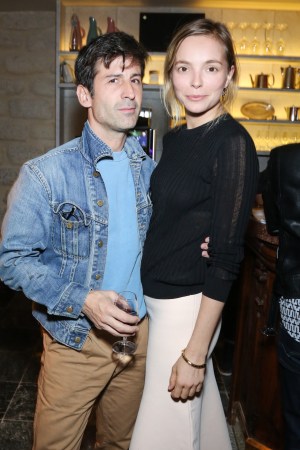 FASHION FARE: André Saraiva celebrated the opening of his Hôtel Grand Amour with a dinner in Paris on Friday night.

“I am very pleased with the place; it’s very cute and full of nice details. That includes the framed photographs of André naked,” said Maison Kitsuné cofounder Loaëc, who designed the hotel staff’s outfits.

The shots aren’t the only wild details adorning the establishment. There was also the Pierre Frey carpet that Saraiva created with phallic motifs for his Castel club in Saint-Germain-des-Prés.

“He didn’t overexert himself. He’s starting to plagiarize himself,” teased Lenthal, before adding more seriously that the hotel’s style was reminiscent of that of Jean-Michel Frank, “a genius interior designer who reinvented the French directory style in the 1930s.”

“It feels warm,” praised Top, noting the hotel’s use of wood.

The Grand Amour hotel, conceived with Emmanuel Delavenne and Thierry Costes, is bound to set the seedy corner of Rue de La Fidèlité (or the Street of Faithfulness) near Gare du Nord and Gare de l’Est train stations on the fast track. (L’Hôtel Amour, after all, turned the Pigalle neighborhood into the epicentre of Parisian cool.) It has 44 rooms, some done by Saraiva’s pals Alexandre de Betak, Olivier Zahm and Glenn O’Brien. Amenities are from Hermès.

“It’s twice the number of rooms, it’s twice everything,” explained Saraiva, over roasted pineapple with ginger ice cream, his six-year-old daughter Henrietta sitting on his lap.

“How’s the Irish Sister?” he inquired, referring to another dessert that’s midway between the French choux pastry Religieuse (or Nun) and Irish coffee.

“I took out all the things that bug me in hotels — starting with not having your room ready when you check in early. So I installed showers, a sauna and locker rooms downstairs. Sauna is great for you after a flight. And then you go to your appointments, and then your room is ready.”  Voilà.

Among other pet peeves, Saraiva cited television. “I am against it,” he said. “Who’s watching TV? You watch online. So you won’t see TV in my house” — or in his hotels.

The relentless graffiti artist and entrepreneur is plotting another coup in the capital of Portugal. “We just bought a hôtel particulier in Lisbon,” he said. “It faces a 656-foot-long mural representing an imaginary city I am currently doing. The place is beautiful, near a monastery. I’ll call it Casa André (or André’s House). It’s about the size of the Hôtel Amour. There will be six rooms, a living room, a library, studios, a bar but no waiter — people will help themselves — no menu but a cook who’s going prepare homemade meals. It won’t be a hotel, but a house for my friends.”

Meanwhile, de Castellane, who earlier this month received the Visionaries Award given by the Museum of Arts and Design of New York, was musing over her next holiday. “We are going to Saint Petersburg,” she said.

“I don’t believe in the grand amour (or one big love),” said Damas, sporting Isabel Marant from head to toe.

Mathias Augustyniak, one half of the graphic design duo M/M, said he does believe in it, while flashing a smile at partner Laure Brossard. Augustyniak was to sign his new book “Berluti: At Their Feet” on Monday night at Colette. The tome, done with O’Brien, was published by Rizzoli to coincide with the 120th anniversary of the shoemaker. Augustyniak has a book on Jacques Tati’s archives in the works, too.

“I have a four month old, Léonard. It’s the fourth time I’ve left him since he was born,” said Chesnais, who gave birth to the baby boy a week after snatching the 2015 ANDAM Prize. The 30-year-old jewelry designer is planning to launch her second collection at Colette. It will also hit Bergdorf Goodman, on top of its existing retailers including Le Bon Marché, Opening Ceremony and The Webster.

Meanwhile, System cofounder Elizabeth von Guttman said the magazine is to launch its Web site in February and an edition in China in April. “It’s the same magazine,” she explained. “Everything will be translated in Mandarin.”