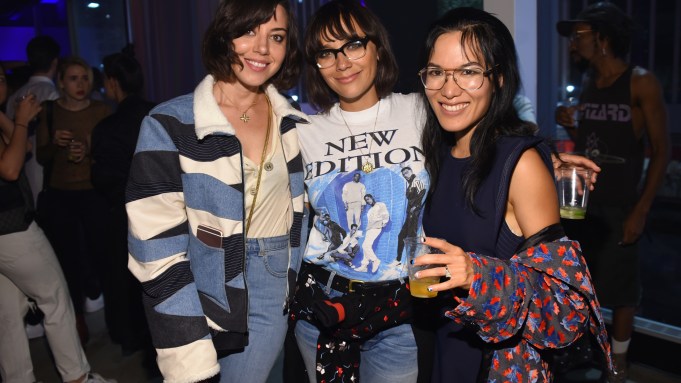 “The Opening Ceremony party is for people who hate fashion week parties.”

So was the word on the street Sunday night in the line outside The Pennsy, a newly opened high-end food hall above Penn Station. The odd tourist got tangled up in the fuss outside, lost in their search for the Amtrak, but the cool kids of Opening Ceremony loyalty were securely there in force. The faces of the brand’s fall 2016 mock-pageant show made the trek over from the Jacob K. Javits Center, including Carrie Brownstein, Fred Armisen, Aidy Bryant, Aubrey Plaza, Rashida Jones and Ali Wong.

Inside, TVs had been turned from their usual sports games to Opening Ceremony brand videos, as trays of meatball subs and cake doughnuts were set out.

“I think it was just a matter of time before I would come together with this awesome, crazy, innovative, avant-garde, so contemporary brand,” said Wong of her appearance in the runway show. “Spike [Jonze] had talked to me like two years ago about collaborating, but then it didn’t work out — he does a lot of work with Opening Ceremony.”

Along with the other notables such as Bryant and Jones, at the show the comedian was interviewed in a pageant-style questioning on a topic of her choice — how she balances work and motherhood. “They gave a framework of the sort of questions they would ask — like sort of pageant questions,” she said. “But I guess what’s been on my mind because everyone keeps f–king asking me is, ‘How do you balance family and career?’ and I’m so sick of it. And what’s not OK with me is that people keep lying and not saying the nanny. And it’s like just give her credit. She’s part of your family. Instead of making some weird lie because there’s some shame in not doing it all by yourself, and I’m, like, ‘No, I can’t do it all by myself.’ And there’s glory in admitting that. So just today I kind of decided [that’s what I wanted to talk about].”

Upstairs, the party only intensified, as a mix of fog machine and vape smoke hazed a dancing Humberto Leon. But for Wong, the night was ending soon. “Momma’s gotta go home back to the back at like 7 a.m. [tomorrow],” she said. “So Momma would love to party, but it’s bedtime.”