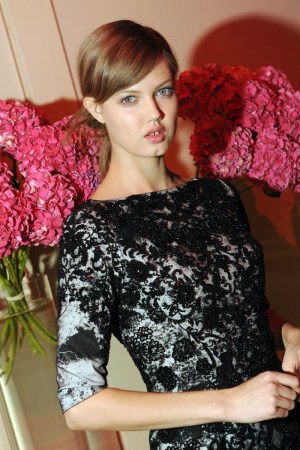 Hugh Jackman and wife Deborra-Lee Furness, Rita Ora, Tommy and Dee Hilfiger, Debra Messing, Martha Stewart, Star Jones, Salman Rushdie, Julie Macklowe and Nicole Miller turned up for the event, which was sponsored by Lorraine Schwartz, jeweler to the stars, for the sixth year in a row.

Schwartz recently designed Kim Kardashian’s much-frothed-over engagement ring from Kanye West and said that she was pleased with her own handiwork. “I think Kim Kardashian has the most perfect diamond,” she said. “And she’s a lucky girl — she has a perfect guy, too.”

There was no shortage of lithe models on deck, and with Halloween imminent, a few were keen to share their costume ideas. For Emily DiDonato, it will be Edward Scissorhands and Neytiri from “Avatar”; for Selita Ebanks, the holiday is “mind-boggling and a mess,” and for Swedish Elsa Hosk, the opportunity to dress up is a welcome one. “In Sweden, no one dresses up,” she said.

“Everyone wears a mask, and then they’ll take it off and be all nervous about it, but I love it. [This weekend] I was Cruella DeVille, and I made my friend dress up as the little dog — he wasn’t too happy about that.”

Tommy Hilfiger, who said he was excited for Pharrell Williams to perform, joked about what it’s like to trick-or-treat in his neighborhood. “It’s a lot of Asprey necklaces, Prada, Gucci, gift certificates to Bergdorf’s,” he cracked.

A performance by Chaka Khan coaxed several guests to the dance floor during the appetizer portion of the seated dinner. Later, Jackman stepped on stage to honor Duncan, his mother-in-law, and told the audience a story about asking Duncan for her daughter’s hand in marriage before proposing to Furness.

“I [decided to] ask Fay for her blessing,” he said. “So I went straight to the Bone Marrow Donor Institute, where Fay had her office…and she said to me, ‘Sit down. Before I give you my blessing, you need to promise me three things. First, that you will love my daughter with all your heart, for all your life.’ I said, ‘Done.’ ‘Number two, that you will never go to bed on an angry word.’ I said, ‘Great idea, hadn’t ever thought of that, I’m in.’ ‘And number three, that you will be a patron for the Bone Marrow Donor Institute.’” The room erupted in laughter. “Even on that big day, Fay’s commitment to her cause was front and center,” he said.

A live auction led by de Pury, featuring five luxury lots, raised $505,000 for the organization. Later, Karolina Kurkova took to the podium dressed as the auctioneer — down to the glasses, the gavel and the suit jacket — and made a short speech to honor him.

Guests who lingered after dinner caught a performance by Williams, who confessed that he lost both of his grandmothers to cancer. “Forget the songs, we’re saving lives tonight,” he said. After a medley of his most recent hits, including the inescapable “Blurred Lines” and “Get Lucky,” Usher joined him for a joint performance that prompted all the girls to get on stage for a dance party.