Angels and Demons at the Victoria’s Secret Fashion Show

Fashion, fantasy and hype made up the main course at the 16th annual show. 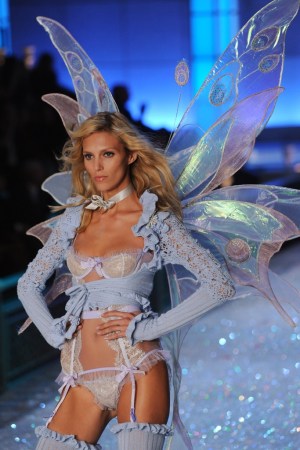 Fashion, fantasy and hype made up the main course at the 16th annual Victoria’s Secret Fashion Show, but several high-profile names from the music world served up the adrenaline rush for dessert.

There were several surprises at Wednesday’s lingerie extravaganza. Kanye West paid an unannounced backstage visit so he could hang out with the Angels before his evening performance, which caused a frenzy as security guards tried to fend off a swarm of photographers. West later belted out his hit “Stronger” during the Super Angels segment of the show inspired by comic strip superheros. Suddenly, Jay-Z, who was not listed as part of the evening’s entertainment, was on stage and the two rappers brought the house down performing “Nig–s in Paris,” to which 1,000 guests including front-row notables Orlando Bloom, Cuba Gooding Jr. and Debbie Harry gave a standing ovation.

During Jay-Z’s cameo, a woman sneaked into the audience and left as soon as he had finished his number. “It was Beyoncé…she wanted to be there for Jay-Z when he sang,” said a spokeswoman for Victoria’s Secret.

Adam Levine’s Maroon 5 performed for the Angels Aquatic scene, and Nicki Minaj, decked out in a smorgasbord of colors, prints and corsetry, climaxed the evening with the Pink finale.

But the biggest surprise of the night was from the fashion arena. Donna Karan was snapping photos of key items on the runway.

Could there be a designer collaboration in the works with Victoria’s Secret?

“Donna was there because she’s a friend of Russel James, who does photography for Victoria’s Secret and she sponsored his Nomad exhibit,” explained a spokeswoman for Donna Karan. “He also shot the spring 2012 Donna Karan ad campaign with Adriana Lima,” who is one of Victoria’s Secret’s top Angels.