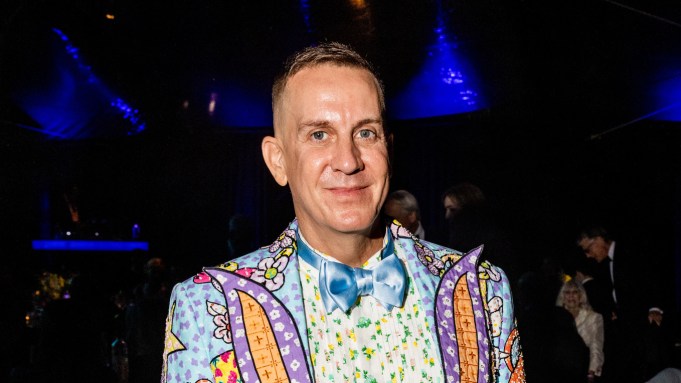 The style set — analog and digital — came out for cocktails and dinner at the Pacific Design Center, including Addison Rae, Paris Jackson, Diplo, Milla Jovovich, costume designer Arianne Phillips, stylists Jean Yang and Elizabeth Stewart, while Bebe Rexha and OneRepublic belted out songs from the stage.

“Everything I think I am, which is cute, happy and sexy at the same time, he makes me feel,” said Anitta, Scott’s date for the night, wearing a Moschino spring 2022 gown with an embroidered nursery menagerie motif, and bunny ears flapping playfully at the décolletage. “All his creations are colorful and happy but have this sweet touch, which is his personality,” the Brazilian pop star added of the designer, dressed in a matching tuxedo.

Hotelier Jeff Klein, Flamingo Estate founder Richard Christiansen, whose L.A. brand of garden provisions and apothecary items are in constant demand, and L.A. artist Rosson Crowe were among the guests.

“As a designer, he’s a real artist, and he isn’t afraid to go there and create out of this world outfits like this,” said Crowe, wearing a gown from the Moschino spring 2020 collection dedicated to Picasso. “I feel an artistic kinship with him.”

“He and Rick Owens were the overly generous kind designers but they were on the West Coast so they never got the love. Then Jeremy went to Paris…” said Yang, who attended her first amfAR gala in L.A. in 1992, when Madonna honored Jean Paul Gaultier. “It’s so validating for him to get the success he deserves. To have the marriage of creativity and kindness is huge.”

“Fun fact, Jeremy used to go to my mother, Regina — the goddess of pain — for facials,” said B. Åkerlund, clad in an Iris van Herpen gown and black veil.  “I love his vision and sense of humor and the idea of not taking fashion so seriously,” added the stylist and designer, whose latest project is an avant-garde dog clothing line inspired by her pup Bootzy Smallz.

“Jeremy has always championed the outsider, the misfit, the underdog. He’s not only championed it in his work, but in who he is as a person,” said Phillips, who has known Scott for more than two decades. “He’s kind to the core. Before diversity and inclusivity were in the headlines, they were part of his ethos. He started as a club kid in New York, when it was just getting over being ravaged by the tragedy of AIDS. He was the next generation. And that consciousness has always stayed with him.”

The Moschino creative director’s work on AIDS fundraising started with the Life Ball in Vienna in 1999, and has included partnering with the Keith Haring Foundation, Project RED, the Trevor Project and now amfAR.

And indeed, the Moschino brand has its own sad personal history with the disease, as well; Franco Moschino died from complications of AIDS in 1994, and his legacy is honored by the Franco Moschino Foundation, which was established to help HIV positive children.

During dinner, famed auctioneer Simon de Pury led the spirited bidding for several art pieces, including a photograph by Robert Mapplethorpe, who also passed away from AIDS. A Moschino fashion show experience was the top seller, snapped up for $250,000 by L.A. billionaire Ron Burkle, who is Scott’s neighbor in Palm Springs. Rae took the stage to honor TikTok for its work as a platform for HIV education, particularly among young people.

The evening culminated in the award presentation by Madonna, whose history with amfAR galas includes honoring Elizabeth Taylor, Sharon Stone and many more over the years.

“In 1991, I stood on the amfAR stage and was forced to clear up rumors I had AIDS.…I recall many journalists asking is it true, are you HIV positive? My reply was ‘no, I just want to help people who are.’ That was eye-opening. I understood then and still do that there is still so much fear,” she said, reminding the crowd that the fight is ongoing.

“Last year, a staggering 1.5 million people were infected with HIV, and 160,000 of those people are under the age of 15. We are living in a pandemic and it’s very serious, but think about this pandemic. It’s still not over.”

Turning her attention to her friend, Madonna said, “To quote the great James Baldwin, artists are here to disturb the peace. So I’m here tonight to honor Jeremy Scott…one of my favorite troublemakers,” she said, dressed in a vintage Moschino look.

“What drives his spirit to create is the same thing that drives his desire to help others. While he’s created many unforgettable fashion moments, his greatest achievement is his dedication to advocating and raising awareness and money for research in the ongoing global fight against HIV AIDS.

“You immortalize a playfulness in life, bringing joy and a childlike energy to your creativity and your fashion creations. Keep using your platform and your platform shoes to change the way people look at others who are different, unique, extraordinary and often marginalized.”

A visibly moved Scott took the stage next.

“I grew up in rural Missouri, where with this sense of fashion you can imagine the taunting and teasing and bullying was sometimes a lot,” he said. “Sometimes it became more than I could endure. But I said these people just don’t get it and one day, I’m going to be friends with Madonna! She was my north star, my lucky star and that’s what got me through the days, the weeks, the years until I could get to New York,” Scott shared.

“Many of you may find it difficult to imagine a time before social media and TikTok when you had glimpses into other peoples lives, and before Ryan Murphy proliferated the airwaves with gay characters and gay casts, and way before Lil Nas X was topping the charts singing about bottoming — even before there was the term ‘ally.’

“Back then, there was only one word that represented a safe haven for young gay boys like me, and that word was ‘Madonna.’ On behalf of all the gay boys and girls you made feel seen, appreciated and loved, I’m so humbled to accept this honor from the most courageous woman I know.”

Madonna walked back onto the stage and once again wrapped Scott in her loving embrace.