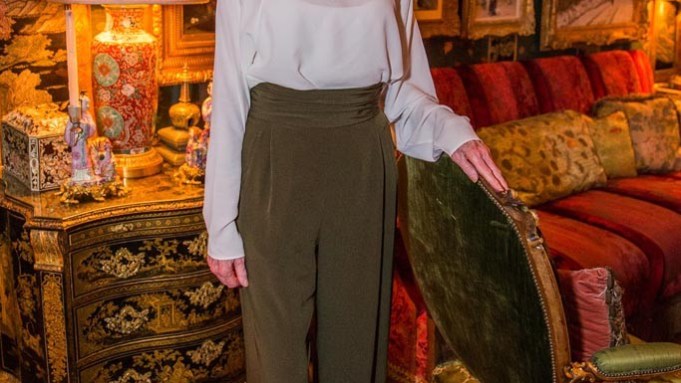 To celebrate the release of “Ann Getty Interior Style,” a book by Diane Dorrans Saeks on the San Francisco interior designer and philanthropist’s work, Getty welcomed 400 of her closest friends and family members, including Denise Hale, Willie Brown, Dianne Feinstein, Jack Calhoun, Jo Schuman, Dede Wilsey, Alexis Traina and Billy and Vanessa Getty, to possibly her finest accomplishment: the 106-year-old Pacific Heights residence she shares with husband Gordon, not an inch of which went untouched by Getty during decadelong renovations.

“This house is her greatest showroom,” said Traina. “This is one of the great houses of America.”

Although, as Dorrans Saeks, a WWD contributor, put it, “Every single thing in this house, museums would kill to have,” (there are more Canaletto paintings on the walls than exist in Venice, not to mention pieces by Henri Matisse, Edgar Degas, Mary Cassatt, Marie Laurencin and Paul Cézanne, to name just a few artists). Schuman, who lives in the house, said Getty is quite informal about it.

“She makes everybody so comfortable. She doesn’t care if you spill on something. We watch television with our feet up, and we eat off of trays,” she said. Commending Getty’s taste, Wilsey said, “She always does something beautiful. When we were having babies, even her nurseries were beautiful.”

Vanessa Getty concurred: “She’s got a great eye. I’ve been with her on antique trips, and I’ve been in awe of her knowledge.”

Before Dorrans Saeks approached Getty about a book, Getty said, “It never occurred to me to do it. She persuaded me. I didn’t think there was a body of work yet.”

The tome covers eight properties in addition to her residence, but Getty, who will be making stops for the book at Sotheby’s and The Carlyle in New York on Nov. 7 and the Oscar de la Renta store in Los Angeles on Nov. 13, realized there’s plenty of fodder to fill future volumes. “She didn’t cover everything. Keep ’em rolling,” she said.

Ann’s son Billy still has to find a place for the book. With three kids, he said, “Our coffee tables are totally covered with crayons and finger paint.”