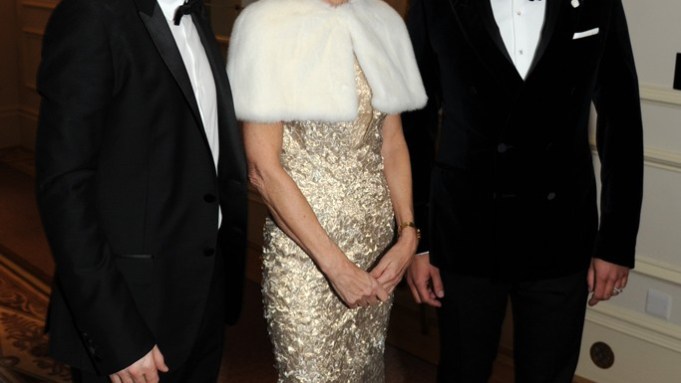 Guests enjoyed cocktails followed by dinner in the Savoy’s Lancaster ballroom, along with a performance by the Choir Boys. Nick Payne’s “Constellations” took home best play, Nicholas Hytner won best director for “Timon of Athens,” best actor went to Simon Russell Beale for his performance in “Collaborators,” while Hattie Morahan received the Natasha Richardson Award for Best Actress for her turn in “A Doll’s House.”

Danny Boyle and his creative team were awarded the Beyond Theatre award for their production of the London 2012 Olympic Games opening ceremonies, while director Simon Godwin won the Burberry Award for Emerging Director. The Charles Wintour Award for Most Promising Playwright was presented by his son, Patrick Wintour, political editor of The Guardian, to Lolita Chakrabarti for “Red Velvet (Tricycle).”

Hosted this year by “One Man, Two Guvnors” actor James Corden, the awards were launched by Charles Wintour in 1955 during his tenure as editor of the London daily.

“My father’s love of the theater was something he shared with his children, so last night was for me immensely personal and utterly thrilling,” said Anna Wintour on Monday. “I am especially delighted for Lolita Chakrabarti, who was awarded the prize in his name, and who is such a distinctive and talented new voice.”

“In about 1958 or 1959, I went up for a film and this person said to me, ‘I’m sorry, you won’t make a film.’ So I kind of took that on board and amazingly, by some real stroke of luck, which it is.…I got to make a lot of films,” she said. “And I have loved every single minute of making them. Every single moment. But, my passion is the theater. My absolute passion.”