By Sharon Edelson and Erik Maza on February 12, 2015
View Slideshow 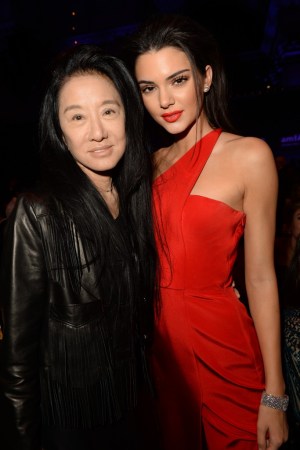 “I don’t know how many amfAR evenings I’ve been to now, 10? Fifteen?” Karlie Kloss said.

The models were expressing more ennui than usual because they were at Cipriani Wall Street for amfAR’s annual New York gala, an evening that has become a rite of passage for the fashion industry — always scheduled the night before the first official day of collections — the same way the organization’s annual gala during the Cannes Film Festival has become de rigueur for Hollywood.

They were all there to pay tribute to those in their cohort who’ve made contributions to AIDS causes over the years.

Chris Rock introduced his “Top Five” costar Rosario Dawson, “one of those rare actors who’s both self-centered and a humanitarian. (Another standout crack: Brian Williams’ six-month suspension from NBC? “That’s called being fired where I’m from.”) Wintour saluted the photographer Patrick Demarchelier, who is “princely in his generosity.” It was less clear what purpose others served here, like Jenner, until one realized she was dripping Harry Winston, the lead sponsor of the evening.

“I’m not doing any interviews today, right?” she said, turning to her chaperone, a publicist, for approval. “She’s not doing interviews,” the flack confirmed.

After a few tribute videos, sincere acceptance speeches, the always lengthy, if spirited, auction led by Simon de Pury (more than $2 million was raised), and a performance by this year’s diva of choice, Shirley Bassey (who camped it up big time by singing the drag queen classic “I Am What I Am” from “La Cage aux Folles”), Whoopi Goldberg introduced the keynote honoree Harry Belafonte, who was a few days away from turning 88.

A few minutes before the ceremony began, he was in a quiet corner of Cipriani taking measure of all the honors that have come his way in his emeritus years, like last year’s Governors Award from the Oscars. He was visibly moved — there was a time when his politics got him branded as antipatriotic, and now it had come full circle.

“I’ll tell you, at events like this or the Oscars, the real joy is that they validate what I do by saying, ‘We honor you for your lifetime of work,’” he said.

The occasion couldn’t pass without asking the longtime outspoken activist about the recent protests around the country over police brutality — just earlier in the day, a New York City cop was indicted for the fatal shooting of an unarmed African-American man. Belafonte was hopeful.

“What I feel is that there’s been a huge awakening of social consciousness in this country. I think we’re in a good place,” he said. Not surprisingly, he’s one of the few New Yorkers still in Mayor Bill de Blasio’s corner. His message to the mayor? “Keep up the good work,” he said.