Annabelle Dexter-Jones Shows Off Her Connections

The socialite held a dinner for her capsule collection for Faith Connexion on Thursday. 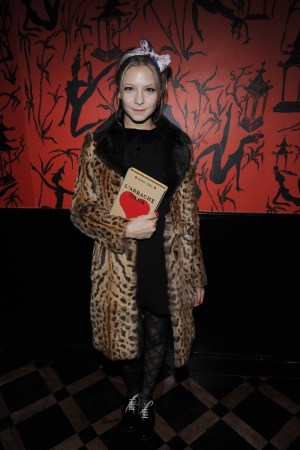 “I just found out about this party,” Samantha Ronson said outside Le Baron Thursday night. Inside, her younger sister Annabelle Dexter-Jones was co-hosting a late dinner with Maria Buccellati to celebrate the former’s capsule collection with the French label Faith Connexion. “Annabelle has got ‘it,’” Buccellati smiled.

Dexter-Jones greeted guests by the bar, sporting a gamine black shift dress and a silk headband, of her own design, under a leopard-print fur coat. “I want to tell you all about it,” Dexter-Jones said, describing the 25-piece line as having a heavy influence from the clothes she and her siblings wore as children. Two of said siblings (Samantha and Charlotte Ronson) were present. The trio posed for photographers against the red-and-black wallpaper that lined the staircase.

Dexter-Jones’ boyfriend, André Saraiva, on hand for the celebrations (one of many to take place at his Chinatown hot spot this week), had designed the line’s signature label — a very prettily handwritten “Annabelle” with a small graphic of a pencil.

“It’s actually really quite good,” one partygoer said of the clothing. “That girl has been out and about in New York since she was a teenager, and she’s still here and relevant…she’s doing something right.”