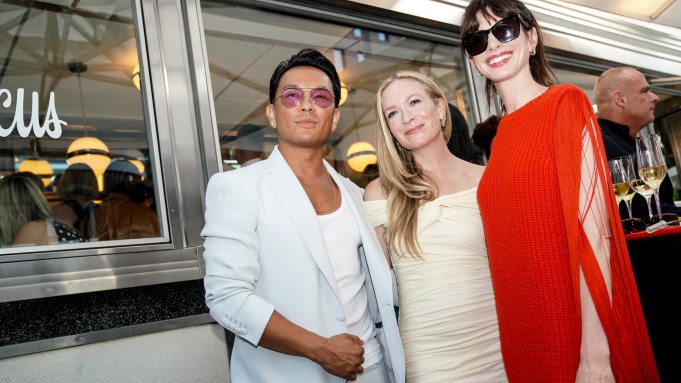 “We just love each other more than we can say,” Hathaway declared as she enthusiastically greeted Walsh, her longtime stylist, outside of the diner. The actress invited nearby guests to experience the tactile sensation of her red fringed Michael Kors dress, which had made its debut on the runway that morning.

“I’ve never gotten to wear fresh off the runway before. I’m really excited,” said Hathaway. “I loved the show. I thought it was so cozy and slinky, and that’s how I feel right now.” Despite the week’s warm temperature, Hathaway was ready to embrace the fall season ahead. “I’m so excited for the moment, how great it’s going to be to be really, really cold. And usually that happens around one o’clock in the morning on Nov. 23. You’ll be standing on the street trying to hail a cab, and the temperature drops 17 degrees instantly, and you go, oh, here we go.”

The colder months also signal the debut of the Neiman Marcus Fall Book and campaign.

“I’m from Texas; I grew up pouring over the pages of the book since I was a child looking at everything, dreaming,” said designer Bach Mai, whose clothing is featured in the current issue. On Thursday morning, Mai would be announced as a nominee for the CFDA’s emerging designer of the year award. “When it came out, to have all my friends — because in Texas everyone gets the book — and my family sending me pictures of my page in the book is the most surreal and humbling experience. It’s truly a dream,” he added. “I’m so proud to be an American designer, but also to be a designer from Texas. I know that Neiman’s woman, and the support Neimans has given me has just been incredible.”

Walsh touted the retailer’s enthusiasm for bringing on new designers and creating opportunities within the fashion community. “They’re so easy to work with,” she added. “If you give them an idea they’re like, yes — let’s collaborate.”

“I’m gonna be honest with you,” said Rembert, who earlier that day showed his latest runway collection for his brand Aliétte. “Neiman Marcus Group as a whole was the first company to invest in me in brick-and-mortar and invest in the brand,” he said. “They didn’t say, hey, we want to invest in you but we want buy your entry-level price points — they invested in me and purchased my luxury price points. And I think as a designer, that gives you hope that there is, one, a market for me as a designer, and two, there’s also room to grow with the company.”

Rembert has been busy this week — in addition to dressing celebrities, including Lizzo for the Emmy Awards, and debuting his latest collection, the stylist is readying Mary J. Blige for her tour kicking off Sept. 17. Asked what audiences can expect to see sartorially from the singer, he offered, “Shine. Boots. A lot of custom. We’re having fun with stones and beads and high shine fabrics, and fabrics that are able to have a lot more flexibility and movement,” he added. “Mary J. Blige is synonymous with her style; ‘ghetto fabulous’ is something that she has her signature on, and I’m there to bring that to life, and to help her cultivate it. She does such a good job at being her and elevating herself that honestly, I’m just a vessel, and I feel great to be part of the collaborative process with her.”

And with that, dear New York Fashion Week, we’ll leave you with two words: