Anne Hathaway and Andrew Rannells attended a screening of 'The Intern' in New York City on Tuesday night. 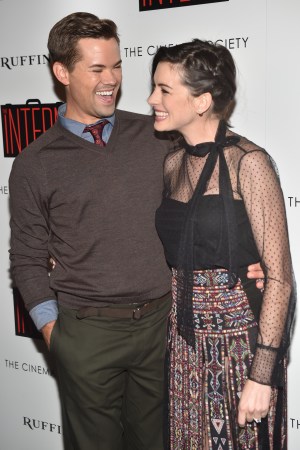 The actress was in the basement of Landmark Sunshine Cinema on the Lower East Side, where the Cinema Society and Ruffino were hosting a second, more intimate screening of the film. It was a low-key, relaxed movie night, but Hathaway still found a diva to fan-girl over. “Oh my god!” the actress shrieked when learning Martha Stewart, the ultimate domestic diva, was in the theater. She even jumped up and down a little bit — all the better to show off the embroidered panels of her Valentino skirt. Ever the professional, Hathaway quickly recovered. “Martha Stewart, I apologize for whatever that was,” she said when she reached Stewart. “It’s been a long few days, and you are the best part of my day today. I think I speak for everyone when I say that.”

In the film, Hathaway plays Jules Ostin, the founder of a fashion based e-commerce company where De Niro comes to, yes, intern. In real life, Hathaway’s “if-I-wasn’t-an-actress” career is less fashion, more physics. “I would try to get an internship at CERN [the European Organization for Nuclear Research],” she said. “Just to see the Hadron Particle Collider in action and actually be there when they find the Higgs boson particle — well, they have found the Higgs boson particle. But to have been there when it happened.”

And as a backup? “It would be cool to intern at a recording studio and get all of your favorite bands coffee,” she concluded.

After the final credits rolled, many of the guests, including Peter Facinelli, Russell Simmons, Wes Gordon, Gerald Butler, Prabal Gurung and Wendi Murdoch, made their way over to Chef’s Club to rehash their favorite scenes over cocktails and an array of small bites. “I definitely almost cried a few times,” noted one model attendee, grabbing for a piece of grilled octopus. “But, I’m wearing mascara, so I really couldn’t.”