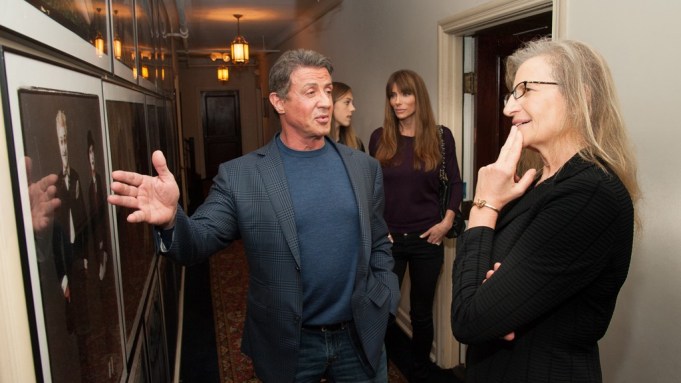 ANNIE’S GANG: While Annie Leibovitz isn’t in the running for an Academy Award statuette on Sunday, she remains the favorite photographer of actual and aspiring Oscar winners, the very act of sitting for one of her portraits now firmly established as a Hollywood rite of passage. So it was only fitting that the publication of Leibovitz’ own Sumo Taschen, as the publisher’s thickest coffee-table books are called, was celebrated days before this year’s awards and by Oscar winners themselves, all of them her subjects over the years.

Sylvester Stallone came with his family to check out his own photo, a nude that appeared on the cover of Vanity Fair. “It looks like my healthier brother,” he said of the picture, taken more than 20 years ago. “She captured a moment. It was her idea to take a Rodin sculpture pose but make it contemporary. It was very effective, and it just gets better. Every picture looks like an album cover.”

It was Wednesday night at the Chateau Marmont in West Hollywood, unofficial Day Two of Oscar week. Besides Stallone, Quincy Jones, Paul Haggis, Melanie Griffith, Patricia Clarkson and Kelly Lynch turned up for Lebovitz at the party by Taschen, Leon Max and Vanity Fair, where Leibovitz originated the Hollywood issue’s signature foldout cover. Taschen’s Sumo volumes are rare honors, bestowed only on photographers with very distinguished bodies of work, and Leibovitz felt privileged to be included among them.

“When Benedikt [Taschen] asked me to do this book, it was like getting a Taschen Oscar,” she said, referring to the publisher’s founder.

“You’re getting to do something extremely special. There’s only a few thousand, and it’s like a piece of sculpture,” she said of the oversize volume, which comes with its own Marc Newson stand in a limited run of 10,000 copies. “It’s not really a book, it’s more like an installation. Most of my books either come out of a project or they have some chronology to them and this was really more of a roller-coaster ride, like a set of riffs. You open it to a page you like and leave it open, because you can’t put this book in your lap. It comes with a stand,” she said.