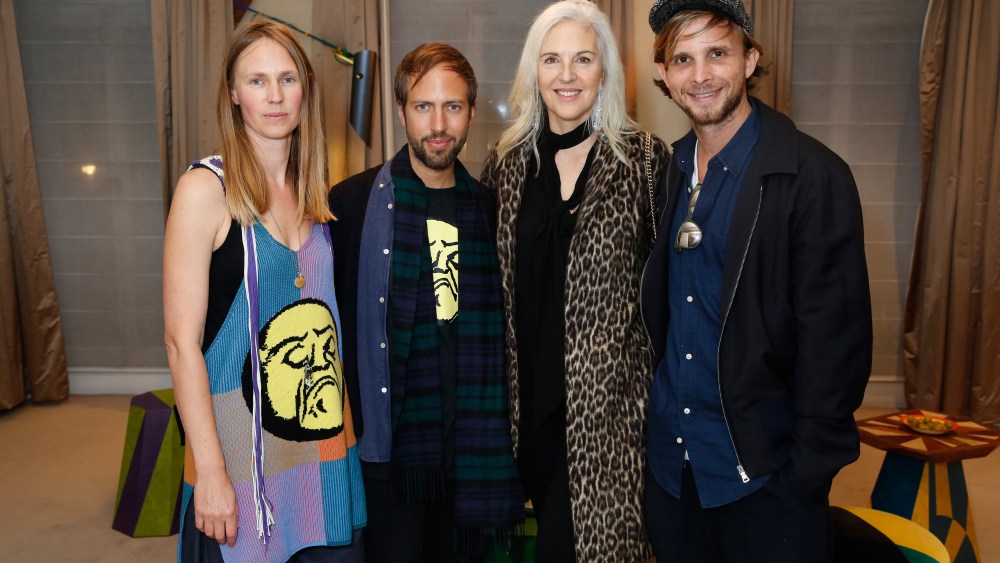 THAT TIME OF YEAR: “Maybe I’m getting old but it is very loud in here,” shouted Andreas Kronthaler over the disco soundtrack at the party Another Man threw with Dior Homme at Albert’s in South Kensington to mark the magazine’s latest issue. “I think in the morning I will be deaf and have no voice.”

It’s Frieze Art week, when London swaps its fashion hat with an artier one — and the parties roll on. At Albert’s, a new private members’ club, it was all about “Another Man,” where Harry Styles appears on three different covers, photographed by Willy Vanderperre, Alasdair McLellan and Ryan McGinley, and inside Styles talks to Sir Paul McCartney about surviving fame.

Jefferson Hack, chief executive and co-founder of Dazed Media, which publishes the biannual title, has his own wish list of dream interviewees: “Hugh Hefner and Jann Wenner — those two have had such an influence on publishing. They’d be fascinating to interview,” he said.

The party was booming — and full of the sort of East London fashion people who are rarely seen in the genteel London neighborhood. “This is very different from our usual clientele,” said Carlo Carello, cofounder of the club. “There is a guy over there wearing a pair of bottomless vinyl jeans. We don’t usually see that kind of thing. I love it.”

Royal Ballet dancer Eric Underwood was enjoying the boisterous vibe. “I’m in the mood for a drink,” he said swirling his Copper Dog Whisky cocktail. “Not too much, though; I am training in the morning for ‘Anastasia.’ It opens at the end of the month.”

Kris Van Assche, who was in town for exactly 26 hours to perform his host duties, said he managed to eke out two hours at the Frieze Art Fair, which runs until Sunday. “I saw Daniel Buchholz’s re-creation of Wolfgang Tillmans’ very first exhibition at his gallery in 1993; it was fun,” he said.

Just don’t call him a collector. “I don’t like the word because it feels as if I’m doing it to make money out of it, but I buy things I like and I’m lucky to surround myself with things I like,” he said, adding that the first piece of art he bought was a Robert Mappelthorpe photo.

“The last thing I bought was a painting by a very young but promising Belgian artist called Ben Sledsens. It’s a big size painting with a girl in the middle of a flower garden.”

Earlier that evening, Peter Pilotto and Christopher de Vos hosted a cocktail reception at the Matchesfashion.com town house to launch their exclusive collaboration with the artist Francis Upritchard and American Express. Walls were hung with works by the pair’s artist friends — a nod to Frieze — while Pilotto said the collaboration was an organic evolution of the duo’s longtime friendship with Upritchard.

“A couple of weeks ago, Christopher and I, were in Merano in North Italy with Francis and her husband, Martino [Gamper], hiking in the Alps. It’s important, when you work so hard you need to recover and breathe and be inspired.” He added: “All the girls in [our circle of artist friends] like fashion, and they are quite specific in what they like and don’t like, so collaborating with them is so interesting.”

Starting Nov. 2, American Express Platinum Card and Centurion Card members will be able to access the Peter Pilotto eight-piece capsule collection 48 hours ahead of everyone else.

The collection encompasses streetwear shapes and motifs drawn from Upritchard’s playful and immersive graphic universe, including a moon-faced man with a very grumpy expression on a number of pieces, including the one-off T-shirt Pilotto was wearing. “He is inspired by a sticker Francis found in Mexico, in the era of happy emojis we were like, ‘This is so funny!’ He is so grumpy that he makes you laugh,” Pilotto said.

Scattered among the rooms of the town house were many art-world figures, including Valeria Napoleone, Bethan Wood, and gallerists Kate MacGarry and artist Luke Gottelier, as well as Daisy Lowe and the actress Monét Mazur.

Those certainly weren’t the only festivities: In Mayfair, Christopher Kane curated an exhibition and showcased a series of paintings at his flagship on Mount Street for his art loving friends in town for Frieze.

Kane hosted the event to celebrate his collaboration with Document Journal, which is available on newsstands now.

The article about Kane includes a photograph by Laurence Ellis, and focuses on the designer’s obsession with “outsider art,” a term coined by artist Jean Dubuffet that refers to work that is unspoiled and rough. The feature delves into Kane’s visit to the Maria Gugging Psychiatric Clinic, an art therapy center — also known as Galerie Gugging — in Austria. During his trip, he met with the artists in residence such as Thao, Alfred Neumayr, Jürgen Tauscher, Arnold Schmidt and Heinrich Reisenbauer.

“I wanted to highlight really credible artists who are under-the-radar and they are outsiders,” Kane said. “I’ve always loved that part of being an outsider and the art it produces. There is this creativity that we are always searching for and the newness. It was so, so beautiful to see all these people working. They have these amazing resources and facilities. They are incredible, remarkable people who have been though so much in their lives.”

Guests including Erdem Moralioglu, David Downton and John Pawson circulated Kane’s boutique looking at the designer’s handpicked selection of works showcased on easels by artists including Neumayr, Reisenbauer, Schmidt, Tauscher, Johann Korec, Oswald Tschirtner and Karl Vondal. The paintings will be on display through Monday and available for purchase in his store.

Kane said he plans to check out the contemporary art fair on Saturday and looks forward to browsing through Frieze Masters, which showcases ancient, Old Masters and 20th-century pieces.

The designer studied fine art as a student and last year he marked Frieze week with an invitation to friends to pick up their pencils and join him in a life drawing session at the store, taught by his former high school art teacher and mentor Janey Broughnan.