The designer and Lancôme hosted a dinner on Tuesday night in Paris. 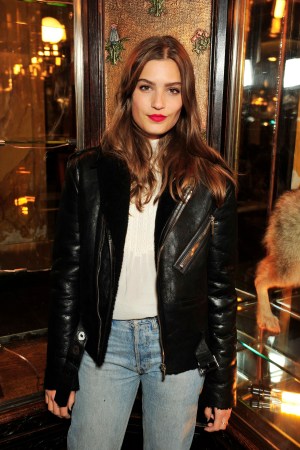 “It’s not super original but…” he said at the dinner he hosted Tuesday night at Caffé Stern, following his show earlier in the day.

A group of some 40 of Vaccarello’s friends joined him at the restaurant, nestled in a warren of covered passageways in Paris’ second arrondissement. Among them was Alma Jodorowsky, who had wrapped a feature film directed by Diastème the previous week.

“For now, the name is ‘Pimpette,’” said the actress, adding the shoot took her to the south of France, Brittany and Paris.

“It’s a story about two sisters going on holiday at their mother’s place,” she said. “We have great adventures.”

Meanwhile, Benn Northover is hard at work on an exhibition about the Velvet Underground, due to take place at the Philharmonie de Paris early next year.

“I am part of a team of about two or three curators just because of my background in working with people like Jonas Mekas, and my heritage with the New York underground film scene through Anthology Film Archives,” he said.

“What’s incredible about the show is that it really explores the cultural landscape of the time, the resurgence of the avant-garde cinema, of culture — that period in the arts [when] so much was happening, it was so exciting,” Northover continued, adding the exhibit will include a series of concerts curated by John Cale.

Also upcoming is a new record by Les Twins, who are plastered all over town in the new campaign by department store Galeries Lafayette. Set for release by year-end, the track will feature Laurent Bourgeois rapping and his identical twin brother Larry singing.

“Everything’s good, we have a movie coming out,” revealed the latter. “It’s the first big role that we have.” Mum’s the word on details of the project, save for the fact that filming will begin in December or January.

Vaccarello’s dinner was hosted by the designer and Lancôme, the L’Oréal-owned brand with which he created a limited-edition eye color set, called Anthony Vaccarello for Lancôme Hypnôse Palette.